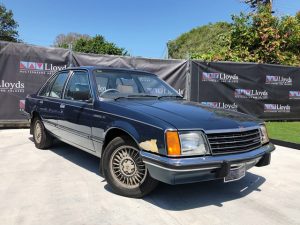 A Brief History of Holden 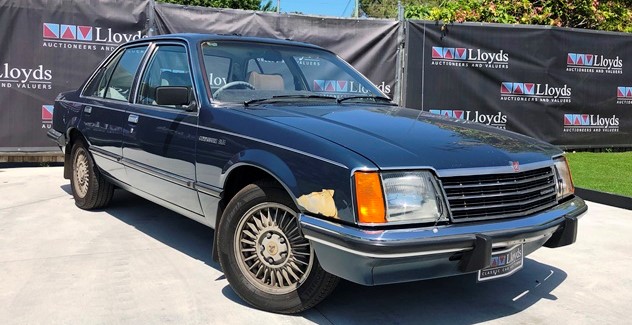 Following General Motors’ unexpected announcement that the Holden brand would be retired by 2021, we decided to take a trip down memory lane for what has become one of Australia’s most iconic names.

In 1852, James Alexander Holden emigrated to South Australia from Walsall, England. Four years later he started a saddlery business in Adelaide, South Australia which saw the humble beginning of the Holden brand.

James’ grandson, Edward Holden, joined the business in 1905 and brought with him an interest in automobiles.

Over the years the firm evolved from repairing car upholstery into full-scale production of vehicle body shells. 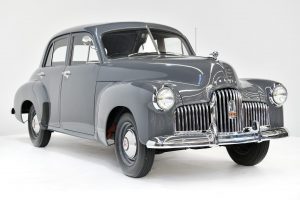 During the war years, Holden’s car production was taken over by the construction of vehicle bodies, weapons, aircraft and engines.

But after the war, Holden returned to producing vehicle bodies for several car brands including Buick, Chevrolet and Vauxhall.

From here, Holden continued to pursue the goal of producing an Australian car. GM preferred to see an American design as the foundation for “Australia’s Own Car” but a compromise was reached.

In 1948, the company finally achieved its long-term goal of manufacturing the first all-Australian motor vehicle.

On November 29, Prime Minister Ben Chifley proudly unveiled the first Holden 48-215, which was nicknamed the “FX”. The FX was a tough and economical family sedan designed for the Australian landscape.

The price was set at $733 (including tax), which was a staggering 94 weeks wages for the average income in those days.

Yet the car was an immediate success and 18,000 people signed up and paid their deposit without even seeing the vehicle! 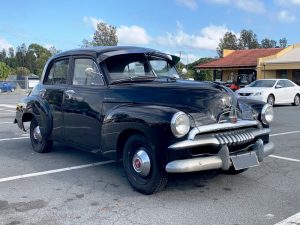 Holden could barely keep up with the overwhelming demand, causing GM to invest heavily in production capacity.

The utility model became colloquially referred to as the “ute” and became abundant in Australian rural areas as the work vehicle of choice! Holden also started exporting vehicles to New Zealand, starting with the utility.

Production of both the utility and sedan continued with small tweaks until 1953, when they were replaced by the facelifted FJ model which also saw the introduction of a third body style, the panel van. The FJ went on to become an iconic Australian car.

Holden’s next model, the FE, was launched in 1956 and was offered in a new station wagon body style labelled the “Station Sedan”.

Strong sales continued in Australia and by 1958, Holden sales accounted for over 40 per cent of Australia’s total car sales! 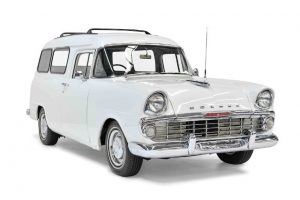 In 1960, Holden introduced its third major new model, the FB, inspired by 1950s Chevrolets and was the first model for which left hand export versions were produced.

Even though Ford unveiled the new Falcon in Australia in the same year, it was not well received as it was not made for Australian conditions.

Holden continued going from strength to strength and had sold a million vehicles by 1962 (an additional million were sold over the next six years).

Holden employee numbers peaked at 23,914 across their seven facilities in Queensland, NSW, Victoria and South Australia.

Holden also began exporting cars to Africa, the Middle East, South-East Asia, the Pacific Islands, and the Caribbean. In 1966, Holden became the first local manufacturer to fit seat belts on all models.

The compact HA series Vauxhall Viva was superseded by the Holden Torana in 1967.

Holden offered the LC (a Torana with new styling) in 1969 complete with Holden’s six-cylinder engine. The LC Torana was also the first presentation of Holden’s new three-speed Tri-Matic automatic transmission.

By the end of the decade, a HK Brougham was the two millionth vehicle driven off the Holden production line.

The first Australian-designed and mass-produced V8 engine was debuted by Holden in the Hurricane concept of 1969 and was then fitted in the facelifted HT model. 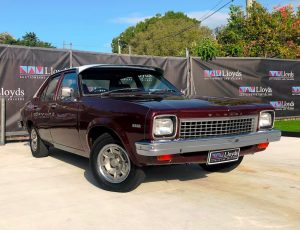 During the 1970s, Holden ran an advertising jingle “Football, Meat Pies, Kangaroos, and Holden cars”, an Aussie version of the “Baseball, Hot Dogs, Apple Pies, and Chevrolet” slogan used by GM’s Chevrolet in the United States.

Holden was producing all of its passenger cars in Australia, and every model was of Australian design, but by the end of the ‘70s, the company would be producing cars based on overseas designs.

The HQ framework led to a new generation of two-door Monaros, which became the top-selling Holden of all time with 485,650 units sold in just three years! In 1975, Holden celebrates 25 years of continuous sales leadership.

The development of the Torana continued with the larger mid-sized LH series released in 1974, offered only as a four-door sedan. The LH Torana was one of the few cars worldwide that was engineered to accommodate four, six, and eight-cylinder engines.

In 1978, Holden introduces its most popular car to date, the iconic Commodore. With the relinquishment of left-hand drive vehicles, Holden continued to export almost 100,000 Commodores to international markets such as New Zealand, Thailand, Hong Kong, Malaysia, Indonesia, Malta and Singapore.

A $300 million Holden expansion program was announced in 1977, including a new engine plant for Fishermans Bend. 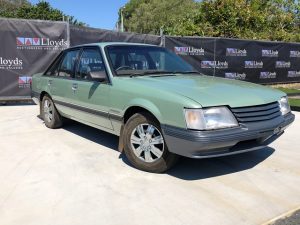 Holden faced some challenges in the 1980s, along with the entire automotive industry.

The Falcon finally surpassed the sales of the Holden Commodore and began its six-year stint as the best selling Australian car.

But despite slipping behind in sales, by the end of 1982 Holden had released three versions of the Commodore.

UAAI resulted in Holden selling rebadged versions of Toyota’s Corolla and Camry, as the Holden Nova and Apollo, with Toyota re-branding the Commodore as the Lexcen.

At GM’s request, Holden was then reorganised and recapitalised, separating the engine and car manufacturing divisions. This involved the splitting of Holden into Holden’s Motor Company (HMC) and Holden’s Engine Company (HEC).

For the most part, car bodies were now manufactured at Elizabeth, South Australia, with engine production remaining at the Fishermans Bend plant.

By the end of the decade, Holden had reclaimed its number one spot as Australia’s top car manufacturer. 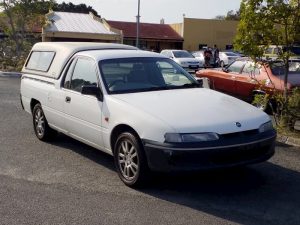 In 1991, Japanese car-maker Toyota beat Holden and Ford to market leadership for the first time in Australia.

UAAI was dissolved in 1996, and Holden returned to selling only GM products. During 1998, General Motors-Holden’s Ltd name was shortened to “Holden Ltd”.

Another returning Holden variant was the full-size utility which was based on the Commodore.

Exterior changes in the early 90s resulted in a smoother overall body and a “twin-kidney” grille which was a Commodore styling trait that remained until the 2002 VY model. 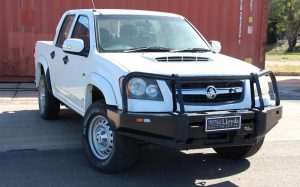 But from March 2003, Holden no longer held the number one sales position in Australia, losing the title to Toyota.

In 2003, a new $400 million V6 engine plant was opened in Fishermans Bens, Port Melbourne and Holden began exporting to Korea, China and Mexico.

The plant was GM’s single largest investment in Australia for more than 20 years. The total number of factory workers that year is 7,350.

2004 saw the introduction of the “High Feature” engine created at the new plant, which had a maximum output of 900 engines per day.

On 18 May 2005, “Holden Ltd” became “GM Holden Ltd”, coinciding with the relocation to the new Holden headquarters on Salmon Street, Port Melbourne, Victoria.

As a result of the split between GM and Isuzu, Holden lost the rights to use the “Rodeo” nameplate.

Consequently, the Holden Rodeo was facelifted and relaunched as the Colorado in 2008. Large car sales peak at 203,524, accounting for 34.6 per cent of Holden’s new-vehicle sales. 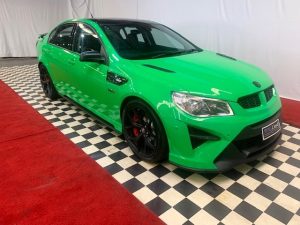 After 15 years as the top selling vehicle, the Commodore was finally outsold by the Mazda3 from Japan. It was the first time an imported car had topped the Australian sales charts.

Through this decade, Holden continued to manufacture motor vehicles in Australia as a division of General Motors, as well as exporting vehicles and engines to other countries. It was also represented by more than 300 dealerships nationwide.

Following an unsuccessful attempt to secure the extra funding required from the new Australian government, on 11 December 2013 General Motors announced that Holden would cease engine and vehicle manufacturing operations in Australia by the end of 2017.

Beyond 2017 Holden’s Australian presence would consist of a national sales company, a parts distribution centre and a global design studio.

On 20 October 2017, Holden finally ceased manufacturing vehicles in Australia. Holden then imported their cars from Opel in Germany and GM plants in Canada, U.S., Thailand, and South Korea.

After a long and successful Aussie history, this week it was announced by General Motors that the iconic Australian brand would be retired by 2021.

RIP Holden… Although we are sure it will remain a household name for years to come!

Take a walk (or drive) down memory lane…

Share with us your favourite Holden memories or stories, we’d love to hear them!