American Muscle that has called Gosford home… Until now! 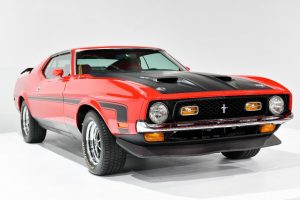 American Muscle that has called Gosford home… Until now!

We show you some of our favourite American Classics from the upcoming Iconic Classic Car Museum Closure!

Of course, the largest privately-owned classic car collection ever to be auctioned in the southern hemisphere is going to feature some American Beauties. Over 25 of them in fact!

This is a rare opportunity to see a collection of iconic names together like Chevrolet, Cadillac, Pontiac and Packard. We have chosen six of our favourites as a taster of what’s to come in this incredible auction.

This is the real deal, the holy grail of muscle cars… A matching numbers, Pontiac GTO convertible!

This is a beautifully presented GTO, in Montego Cream, showcases the original factory black interior with the matching factory black, power convertible top.

Perfect for Sunday afternoon cruising in summer with factory fitted air conditioning, this was a genuine one owner vehicle from 1967 to 2008! It then formed part of the highly regarded Bill Jane Car collection until moving to Gosford Classic Cars.

The 1967 Pontiac GTO certainly stands as one of the most beautiful muscle cars of all time, not to mention a very rare and collectable investment!

1967 saw the final release of the C2 Stingray which makes it an extremely rare and a timeless US classic!

As one of the last to leave the St. Louis factory, USA in June 1967, these are an incredibly rare sight and a showpiece among the classic car community. The driving experience in one of these is simply remarkable.

After arriving in Australia in December of 2006, its full exterior restoration was undertaken in 2008. This C2 Stingray is one of only 3,464 finished in Marlboro Maroon and the body presents immaculately with the paint carrying a brilliant depth.

All interior components have also been completely refurbished but all parts, including the dials and badges, remain genuine!

The 1969 Camaro is considered one of the most popular Chevrolets of all time. Add to that Chip Foose's design and custom touches, and the result is something very special!

Chip Foose is one of the most recognized and celebrated custom car designers. In conjunction with Unique Performance, he set out to build the ultimate Camaro street machine.

This particular car is fitted with a 620Hp 572ci V8 Chevrolet with a five-speed manual transmission that sounds amazing through the custom exhaust. It's a driver's car!

A combination of classic and modern technology painted in striking Hot Hue’s Orange, and signed by Chip himself, this is an unbelievable vehicle.

This particular Boss 351 Mustang is one of only 1700 built. Styled was sharp lines, an aggressive front end, and a racing wing on the back, any enthusiast could tell this car was designed to compete.

This matching numbers Mustang has a twin air duct bonnet with easy-twist latches which makes quick access to the 351 Cleveland R-Code V8 engine a breeze. Pumping out 330HP, this beauty is 1 of only 1700 ever built.

This car has been meticulously restored to look brand new and to turn heads as it roars by.

The exterior is bathed in classic Cherry Red with black decals and a black bonnet. The interior is also immaculate, with red vinyl and black dash, just as it did when it rolled off the production line in May 1971.

Don't miss out on an opportunity to own a piece of American-muscle history!

As an iconic piece of US military history that is equipped with basic armour, a roof weapon map, a VRC radio, and a front winch, this unit is ready for military deployment!

Built by AM General in 1989, the Humvee M1026 Slant Back is an armoured carrier which saw its first military deployment in the Gulf War and the invasion of Panama.

Its body shows its post-war condition and features, what is believed to be, bullet dents on the rear bar. This proves this vehicle is as heavy duty as it looks and is durable beyond any doubt!

Powered by a bulletproof 6.2 litre Detroit diesel engine and linked to a three-speed automatic transmission, the M1026 is capable of climbing gradients as steep as 31 degrees. This is thanks to its immense torque, suiting it perfectly to battle conditions.

It has a rich and successful military history which makes it a highly collectable vehicle today. In good running order and unrestored condition, this very desirable and unique vehicle would complement any collection and make the ultimate talking point!

During the pre-World War II era, Packard was synonymous with the highest level of American luxury and were the main rival for Cadillac in the market!

Following World War II, Packard began feeling the pinch financially, so they pulled all their resources together to create a model to save the mark… The 400. Packard released their 400 models in 1955 as a top of the range flagship coupe.

This was the last model Packard ever produced and they definitely saved the best till last. This model features an ultramatic push button, automatic transmission, air conditioning, height adjustable rear suspension, and a 5.8L V8 engine which produces 260BHP.

This particular car is in excellent early restored condition and is ready to be driven and enjoyed. This is a fantastic opportunity to purchase one of the most iconic Packards ever produced!