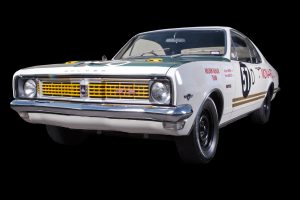 An icon of Australian motorsport – Holden’s first factory built 1969 HT Monaro GTS 350 – will go under the hammer this weekend, where it is tipped to exceed $1M – but not before it retraces the steps of its final race, in a Lap of Honour through Melbourne.

Starting at the Preston dealership which originally delivered the car to legend Harry Firth for race preparation, the HT Monaro will relive its colourful history in a series of key pit stops around Melbourne, each of which were instrumental in making this one of Australia’s most influential race cars.

Following Firth’s defection from Ford, this HT Monaro was the first car he prepared for Holden and driving duo Kevin Bartlett and Spencer Martin – both of whose names are still emblazoned on the car’s original, numbered 57D panel work.

The Monaro will then travel through the streets of Melbourne to Springvale, where its debut in the Sandown 300 ended in a dramatic fireball, just 45 mins into the race. During the crash, the car’s fuel tank was ruptured and the resulting patch can still be seen today.

From here, the car will visit the site of what was once Firth’s Queens Avenue workshop in Hawthorn. It was here that the surprisingly mundane reason for the crash was uncovered; the contents of the road and race brake pad boxes had been mistakenly switched.

Despite this finding, the car was still stripped down and every nut and bolt inspected, with Firth making a range of other modifications based on his findings.

It was these adjustments which were behind Holden’s legendary three-car campaign at the Hardie-Ferodo 500 at Bathurst, when Colin Bond and Tony Roberts won the race and rookie Peter Brock and Des West finished third.

Having launched the careers of countless drivers, this irreplaceable piece of Australian Motor Racing history was hailed by Firth himself as the genesis of the Holden Dealer Team’s twenty year domination.

It is for this reason that Auctioneer Bill Freeman says, “We expect that this magnificent piece of history will break seven figures – making it the most expensive Holden ever.”

The auction, by Lloyds Auctioneers and Valuers will take place at Hanger 85, Bristol Street Essendon Airport at 12.00pm, on Saturday August 19.

(Press and general public welcome as listed below)

Sandown Raceway – 591-659 Princes Hwy, Springvale – Monaro will be positioned on the first straight of the race track for photo opportunities and interviews. Press only.

Other filming/photographic opportunities with the car are available until the time of auction on Saturday 19 August, at the Lloyd’s Essendon Auction Premises. Please contact us for more information.