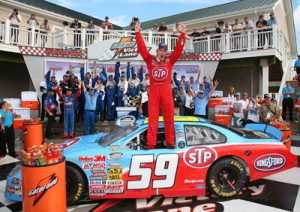 The 800-horsepower race car reaches a top speed of more than 320 kph and is the very car that Marcos Ambrose drove to his first win in NASCAR competition.

The car had since been in storage at an old workshop in Charlotte North Carolina for more than a decade before being mechanically rebuilt last year and then shipped to Australia.

Currently the car is owned by a well-known Motorsport enthusiast who has relocated it to Australia where it has been in storage and serviced.

“This is a race that many Australian motorsport enthusiasts will not forget and to be able to offer this incredibly special car up for auction for the next custodian to treasure is very humbling,” said Mr. Lee Hames, Chief Operations Officer for Lloyds Auctions.

Cosmetically the Ford has not been touched since appearing in victory lane at the Zippo 200, still featuring the major bumps and bruises as well as the remaining windscreen tear-off strips that were unused during the race.

“As we have seen in the past few years with many cars like this, car enthusiasts are passionate about owning these iconic pieces of history so who knows what this car could sell for,” said Mr. Hames.

“Any classic car that is full of history, provenance, celebrity affiliation and any links to motorsport all come together to produce the ultimate aspiration for any car enthusiast,” continued Mr. Hames.

Last week the car hit the track again for the first time since its victory lane winning at Watkins Glen International Raceway in the US in 2008.

Supercars driver Brodie Kostecki who has had extensive experience in US oval racing took the car for a spin at Queensland Raceway in Ipswich and was blown away.

“Whoever buys this rig is going to be getting a pure race car with a pedigree that can be matched by no other car,” said Brodie.

“There will only ever be one car that was taken to NASCAR victory lane by an Australian for the first time and this is it,” he continued.

Bidding for this car along John Harveys iconic 1977 Holden LX Torana along with many other iconic race cars is open now at www.lloydsauctions.com.au with the auction ending this Saturday from 6pm QLD time.