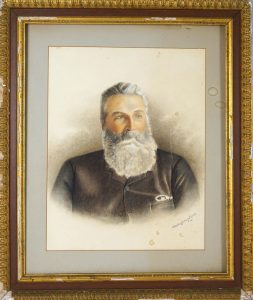 The Estate of the Sloane Pastoral Family is going to auction, with the collection completely UNRESERVED offering bidders the opportunity to own historic treasures from a collection that captures early pieces of Australian History.

The Sloane brothers arrived in Victoria in the beginnings of the gold rush and realised their skills they acquired in the docks of Glasgow were easily transferred into the buying and selling of gold.

With their fortunes rising the family went on to settle in Mulwala in 1862 as Sloane’s Mulwala Homestead which is now owned by the Commonwealth of Australia and is heritage listed.

They went onto establish Sloane and Co which then formed into Elders Pastoral Co. who is now commonly known as the leading agribusiness Elders.

The Sloane family influenced Aussie history when they attended the early federation meetings in Corowa NSW and were then involved as part of the birth of Australia’s Federation where the family still retains the collected history of memorabilia to this day.

With nearly 2000 items on offer each with their own story to tell and going under the hammer completely unreserved, Lloyds Auctions say this is a once in a lifetime opportunity.

“The only comparable auction in terms of scale and importance that I could relate to this event would be the Joh-Bjelke-Petersen estate sale we held back in August last year, where we saw an 8-hour auction that created bidding battles across the country,” said Mr. Lee Hames, Chief Operations Officer for Lloyds Auctions.

“Auctions like these don’t often come around with iconic items this rare, so this is a historians and collector’s dream and the perfect opportunity to own a piece of Australia’s cultural heritage,” continued Mr. Hames.

If you are interested in finding out more on the UNRESERVED Sloane Family Estate, then visit www.lloydsauctions.com.au where bidding is open now online with the first auction closing on Tuesday the 27th and the second sale closing on Wednesday the 28th of April from 7pm.