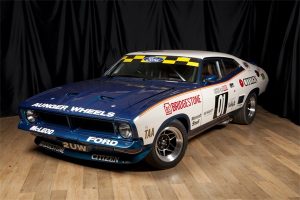 Lloyds Auctions will be auctioning this iconic car, which is arguably the best Group C Ford XB Falcon hardtop in the world. Taking up an abandoned homologation program initiated by Ford Australia and motorsport icon John Goss back in 1975 to create a race car based on the XB Goss Special, this prototype XB is a wish-list of everything Goss wanted for the 1975-76 seasons after his Bathurst win in 1974.

“I built with my own hands most of the cars I ever raced” says Mr. Goss.

Built by an extremely talented car builder on the Gold Coast over a period of three years under the direction of racing legend John Goss, with input from former senior Goss mechanics, the result is a period correct race car with all the thunder of the ‘70s Group C era combined with period-correct fittings and an attention to detail right up there with a modern production car.

“It resonates with me because I’ll always remember, there’s a little bit of Bathurst in every Ford Falcon” he says.

Displayed in Goss’ 1975 Bathurst livery this XB is as close to perfection as you will find anywhere and is sure to fill the gap in any collection or the top step of the podium in any race meeting it attends. This amazing piece of Australian motorsport history is immaculate in every respect and is ready to race and win.

John Goss will be at Lloyds Auctions this Saturday to handover his esteemed Group C Ford XB Falcon to the next custodian, which is sure to be an emotional but memorable day for everyone involved.

Lloyds is set to auction this car along with other collectable and classic cars at 69 Manchester Road, Carrara on 9th of December 2017 from 12pm AEST (1pm AEDST). Further information and Online Bidding is available at HERE