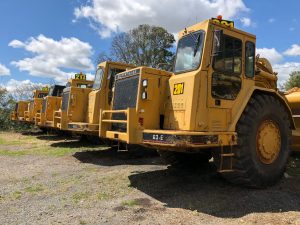 As work piles up across the civil & mining sectors, companies are sourcing new ways to purchase heavy equipment due to high demand and limited supply.

“People can’t get their equipment fast enough, there is a strong demand across the industries of civil, agriculture and mining,” said Glenn Screech Head of Business Development at Lloyds Auctions.

Construction and mining companies upgrading their existing heavy equipment to brand new equipment now need to have their jobs scheduled out almost a year in advance due to the delay of supply which can take up to a year.

However, a 12-month lead time for new equipment isn’t always a viable option for smaller contractors who have smaller lead times and don’t have the ability to wait for a new piece of equipment to be delivered. These businesses are finding alternative ways to source their heavy equipment gear by purchasing previous models from those who upgrade to new gear.
“We are seeing a trend where some companies are selling fleets of their existing heavy equipment to upgrade which is allowing smaller contractors to purchase previous models giving them the ability to start their new contracts immediately.” Mr. Screech continued.

With the growing population and the demand for better infrastructure, particularly in commercial construction, earthmoving equipment is the new booming industry in most demand for gear.
Roads, highways, buildings and commercial infrastructure are continuing to grow in demand as well as urban development such as housing. These each contribute to attaining heavy equipment such as dozers, excavators, graders, rollers and portable buildings to keep the jobs rolling.

“In the last year Lloyds Auctions conducted many auctions containing civil and agriculture gear; with many achieving 100% sell through rates and many items well above their reserve prices,” Mr. Screech stated.

Confidence, jobs and security are all common talking points in the media and consistent heavy equipment sales indicate that these industries are all going strong.
“We have had to increase to weekly auctions with many auction totals achieving six to seven figures. For example, we have several auctions coming up this week with major brands including CAT and Komatsu gear,” continued Mr. Screech.