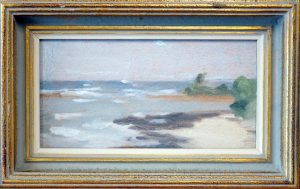 Arising from a private collection in Bowral, two very rare paintings by the pioneering Australian Female Artist Clarice Beckett will be on offer at auction this Friday.

Born in 1887, acting as a true trailblazer for female artists in her era and now featuring in most major public collections within Australia, Clarice Beckett is recognised as one of Australia’s most important modernist artists, known for painting landscapes such as beachscapes rural and suburban settings.

Clarice Beckett artworks are very rarely seen in the market with only 369 paintings known to have been salvageable of her 2000 works that she ever produced after they were left in an open farm shed for many decades.

She has come to be known as a visionary of Australian modernism with the largest exhibit of her work ever now currently being held in the Art Gallery of South Australia.

“These two paintings are incredibly special, they have never been to auction before, nor have they been placed on the open market,” said Ms Benson, Head of Fine Art & Antiquities for Lloyds Auctions.

The current owners came to own the artworks from their parents who purchased them from Gallery Huntley in Canberra back in 1985 with original receipts still on hand.

The artworks also come with a letter of provenance from the gallery with the letter for ‘Serene Evening’ stating the artworks were originally offered by the gallery on behalf of the artists sister. The artwork Rickett’s Point comes from the private collection of the gallery owner.

“We feel extremely honoured to be offering these two original Clarice Beckett paintings for the very first time at auction this Friday,” said Ms Benson.

“It is a significant moment in history that we recognise Clarice Beckett by auctioning these two paintings this week as it coincides with the display of her largest exhibit yet ‘The Present Moment’ being held in South Australia right now,” continued Ms Benson.

If you are interested in browsing the Clarice Beckett paintings or browsing the collection of other iconic artists within the auction then head to www.lloydsauctions.com.au with the auction ending this Friday, April 30 at 7pm.