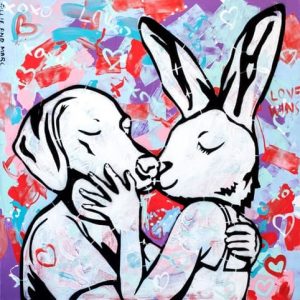 Do you travel everywhere with love?

The story behind Gillie and Marc’s famous art characters, Dogman and Rabbitwoman.

Gillie and Marc are two of the most recognisable public artists in Australia. Based between New York and Sydney, the pair create art together as if they were one person and are referred to by the media as “the world’s most loving artists”.

You may have seen their bronze sculptures in the streets of Melbourne, Adelaide, Sydney and Hobart, or further abroad in Auckland, Beijing, London or New York!

These sculptures feature their iconic character duo, Dogman and Rabbitwoman, and are part of their Travel Everywhere with Love project which was launched in 2017.

Gillie and Marc were inspired by a family trip to Egypt. There they saw beautiful artwork and sculptures where they put the head of an animal on a human body (or the other way around).

The human then embodies the characteristics of that animal. A well-known example is the sphinx, which is a hybrid of a lion and human. The human now becomes very powerful, like a lion.

Gillie and Marc have always been crazy dog people and their adoration for pups comes from the loyalty and unconditional love they show us humans. So why not put a dog head on a human body so a person can now obtain these admirable qualities?

Well that’s exactly what they did, and Dogman was born. But Dogman was lonely and needed a companion.

Rabbitwoman was created as an unlikely partner for Dogman. In the wild, these two species would not get along. The dog would chase the rabbit and probably attack and kill it.

So, Gillie and Marc decided to join these two animals together as soulmates to show we could embrace the fact that, in society we are all different and unique and we should accept these differences and not see them as problems.

It became clear that Dogman is similar to Marc and of course, Rabbitwoman is like Gillie. They both feel these characters are their alter egos in some way and they tell an autobiographical tale. 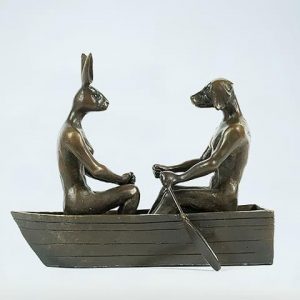 2017 saw changing border control policies and an increasingly difficult and dangerous situation for refugees and immigrants across the world. Gillie and Marc believe art is a powerful platform for change.

The two extremely lovable characters of Dogman and Rabbitwoman formed the core of the world’s biggest global sculpture project, Travel Everywhere with Love. Without a definitive race, religion, or culture, they symbolize the acceptance of all people as one.

Travel Everywhere with Love was born out of the conviction that it’s more important than ever we put our differences aside and protect each other through love and togetherness.

Interactive bronze sculptures of Dogman and Rabbitwoman have popped up in major cities across the globe who support inclusiveness. When you come across the familiar Rabbitwoman and Dogman in a city, you will know that you’re welcome there.

Each sculpture is designed with that city in mind and you can see the bronze duo on a scooter in Jakarta, having coffee in Melbourne and with a big apple in New York (of course)! The goal is to have 100 sculptures in notable locations around the world that believe in peace, harmony, and progress! 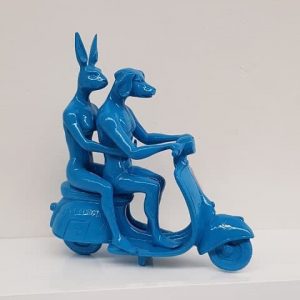 Initially, Gillie and Marc were worried that two naked humans with animal heads might be off putting for some people but Dogman and Rabbitwoman were received with open arms across the world!

There stands a wonderful message that in fact, no matter how different you are, you can be lovers, friends, and companions and get along as one.

The sculptures have truly become a wonderful phenomenon. Look them up under the #TRAVELEVERYWHEREWITHLOVE on Instagram!

But you don’t have to travel everywhere to give and receive love with Dogman and Rabbitwoman. Gillie and Marc have created art that features these extraordinary characters that can be shared with family and friends in your home.

You can spread the message of Dogman and Rabbitwoman and Travel Everywhere with Love from the place closest to you with smaller versions of the famous public bronze statues, colourful fibreglass copies and canvas paintings.

This Sunday we have our Massive Gillie and Marc Event here at Lloyds where you can bid for your very own original artwork from the hottest art duo in Australia right now.

Want to know when we are entrusted with more of this fabulous art?

Sign up below for alerts straight to your inbox so you never miss a thing!