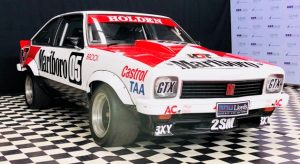 Play Video
This page forms part of a series of articles on the Brock Collection Auction. Click Here to Read More ...

Brock left HDT in 1975, seeking the freedom to race different types of cars as well as realise his ambition of racing overseas. In 1976 Brock formed ‘Team Brock’ and ran his own Torana L34, before rejoining HDT in 1978 after three years as a successful privateer racer.

Achieving back to back Bathurst 1000 wins in ’78 and ’79, Brock continued to firmly etch himself into Australian Motorsport history and the hearts of motorsport fans across the country!

1979 was to be the final Bathurst win for Brock in a Torana and marked the end of an era as the Commodores took over!

This car here is the L34 and it started its life in 1974 at Bathurst with Harry Firth. There were only three genuine L34s made back in ‘74.

Peter drove this car even though there was newer technology out and was still winning races with it. This earned him back his number one drive, it’s a very impressive car!

The 1974 V8 Torana L34 marked the end of Peter Brock’s association with Harry Firth’s Holden Dealer Team. Brock left HDT in ’75, but in ’78 he was drafted back into the factory-backed Holden Dealer Team under the new team manager, John Sheppard.

This car is a former HDT Torana L34 race car updated to A9X specifications and presented in HDT 1978 race colours. The last time Peter Champion spoke with his good mate, Peter Brock, he showed Champion a few little tricks on this car that were pretty amazing.

When Peter Champion was putting together the “Brock Collection”, the thing that grabbed him about this car was that it has Harry Firth’s DNA in it. It was supposedly Harry Firth’s customer car and the prototype for the A9Xs.

This car hasn’t been touched since it arrived in Peter Champion’s care and is extremely popular because it was homologated for the A9X that got the ‘78 and ‘79 Bathurst wins. It’s those wins that everyone will remember the most of Brock, especially the six-lap record combined with a lap record on the last lap in 1979!

Brock even retained ownership of the 1979 Bathurst winning Torana until 1993, the only race car from his career that he kept for any period of time because it was so special.  This is “the little brother” to that legendary car!