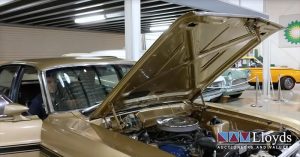 Proving that prices for Aussie muscle cars are continuing to climb are the sterling final results from Lloyds Auctions ‘Classic, Muscle and Barn Find’ auction held at the Shepparton Motor Museum over the weekend, headlined by a 1971 Ford Falcon GTHO Phase III which soared to reach a final sale price of $500,000.

The Monza Green XY Falcon GTHO offered was subject to rapid bids early on levelling out at under half a million dollars before one of several phone bidders stepped up to become the new owner of this unrestored example of Australia’s most desirable muscle car ever produced. Built in 1971 with Light Saddle interior trim this matching numbers Phase III featured the legendary 351ci Cleveland V8 and four-speed gearbox with the classic five-slot wheels setting off what is the most collectable and iconic Australian muscle car ever.

Further proof that Aussie muscle cars are the new collectable were results of $201,000 for a fully restored 1969 Ford Falcon XW GTHO Phase I in Grecian Gold with a black interior and a staggering $225,000 for a genuine E38 ‘big tank’ Valiant Charger, a car which with the help of triple Weber carburettors cranked out 280hp in the early 1970s and took the fight to the mighty Ford GTHO.

Other results include a 1968 Ford Shelby Mustang GT500 with 428ci Cobra Jet V8 engine which had undergone a nut-and-bolt restoration was passed in at $170k with negotiations continuing and a gorgeous 1956 Mercedes-Benz 190SL which pulled an impressive $185,000.

An RPO83 Ford XA GT Falcon sedan in Wild Violet, the spiritual successor to the Phase III and thus commonly referred to as the ‘Phase IV’, sold for $150,000 while at the other end of the spectrum a ‘barn find’ Ford Falcon XB sedan was hammered down for $7100, and from the red corner a Holden Torana SLR 5000 sedan sold for $96,000.

Details of upcoming auctions are available on the Lloyds website.

To view the collection or bid online, visit www.lloydsauctions.com.au/classic-cars