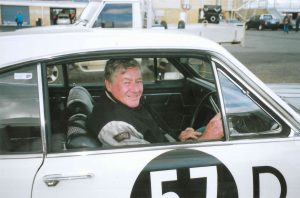 The first factory race car to bear a Holden badge will go under the hammer tomorrow at 12 noon, with classic car experts anticipating the sale will set a new record for an Australian vehicle sold at auction.

The 1969 Holden HT Monaro being offered for sale, is credited with launching the Holden Dealer Team’s racing dominance in the 70s and 80s, cementing the Holden vs. Ford rivalry that still divides the nation today.

As the first Holden prepared by motorsport legend Harry Firth, the Monaro debuted at the 1969 Sandown 300, but a fiery crash at the 45 minute mark ended the race prematurely.

Findings from the crash were used to homologate changes for other HDT Monaro’s which led to Colin Bond and Tony Roberts claiming victory at Bathurst the same year, with Des West and rookie Peter Brock finishing third.

The auction has drawn interest from those familiar with motorsport of the era, many of whom will be in attendance at the auction, including Head Mechanic for the Holden Dealer Team during the late 60s and 70s, Ian Tate.

“This car is a hugely significant piece of Australian motorsport history, not only shaping the success of Holden as a company, but also setting the stage for the domination by Holden and Peter Brock for the next two decades,” Auctioneer and classic car expert, Bill Freeman said.

The Holden vs. Ford rivalry that flourished as a result is obviously as strong as ever – “it’s as Australian as Vegemite and stubbies!” Freeman said.

“While we’re seeing rare classic cars like Holden Torana’s and GT Falcon’s selling for hundreds of thousands, none have the colourful backstory or cultural significance of this Monaro, which is what makes it so rare and special,” said Freeman.

The auction is being held by Lloyds Auctioneers and Valuers tomorrow, Saturday 19 August, at Hanger 85, Bristol Street, Essendon Airport, commencing at 12.00pm. The general public are welcome to attend. The auction will also be broadcast live on the Lloyds Facebook page.

Bids can be made online at: https://www.lloydsauctions.com.au/57d or in person on the day.

(Press and general public welcome as listed below)

Sandown Raceway – 591-659 Princes Hwy, Springvale – Monaro will be positioned on the first straight of the race track for photo opportunities and interviews. Press only.

Other filming/photographic opportunities with the car are available until the time of auction on Saturday 19 August, at the Lloyd’s Essendon Auction Premises. Please contact us for more infomation.