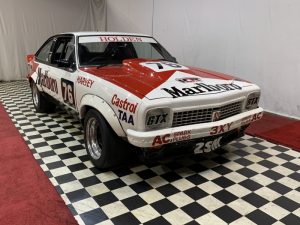 A 1977 Holden LX Torana driven by renowned race car driver John Harvey during the 1977 – 79 Australian Touring Car Championship is up for auction this Saturday.

“Arguably one of the most important pieces of Australian Motor Racing History to go under the hammer in some time, this car is presented in the correct HTD Marlboro livery bearing #76 and running as good as the old days thundering around the tracks,” said Mr. Hames, Chief Operations Officer for Lloyds Auctions.

The 1977 Holden LX Torana was published online a few weeks ago with Lloyds confirming both national and international enquiry has been very strong, with current bidding online already pushing $700,000 with 3 days to go until auction day on Saturday.

“Who knows what this car could end up selling for, I wouldn’t be surprised if it sells for $2 million,” continued Mr. Hames.

“The significance and provenance of this car is paramount to Australian history and is something that is very special and extremely rare, there is no other like this car, it is 1 of 1 driven by legendary race car driver John Harvey,” said Mr. Hames.

The Torana was the most successful Australian Touring Car ever to be released by GMH, its achievements in the 1978 season have been unmatched or unrivaled by any other Australian Motor Car. It created history as the first truly homologated car built purposely for motor racing and being the most successful by far.

This car includes a multitude of racing equipment including the spare tyres required for racing, John Harveys, worn jacket, boots, helmet, trophies, racing records and a huge array of other memorabilia items.

The current custodian of the vehicle purchased the car in 2002 and has had an association with John Harvey since 1999. John was kind enough to provide the racing history to the best of his knowledge.

Bidding for this race car along with many other iconic classics is open now at www.lloydsauctions.com.au with the auction ending this Saturday from 7pm AEDT time.