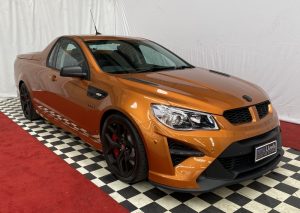 The 2017 GTSR W1 Maloo Ute has broken records at auction this weekend fetching over $1 million along with Australia’s very last serial numbered Holden which sold for three quarters of a million under the hammer.

“What an incredible auction to experience we are very humbled to have auctioned both of these iconic cars breaking Australian records” said Mr. Lee Hames, Chief Operations Officer for Lloyds Auctions.

“The two new owners of these vehicles are extremely excited to have been the successful bidders of these cars in the 4-hour auction today,” he continued.

The HSV W1 Maloo Ute broke the record for Australia’s most expensive road registerable muscle car selling under the hammer for $1,050,000.

“There were 3 bidders that bid over $1,000,000 on the Maloo Ute with 2 of them being Holden enthusiasts, however the winning bidder is a group specialising in raffling off unique cars, so I don’t think it will be the last time we see this car,” said Mr. Hames.

After spirited bidding over half an hour the very last serial numbered Holden sold for $750,000 to an avid Holden collector on the East Coast.

“The results of these two cars are extremely worthy due to the strong enquiry we had nationwide from collectors, investors and Holden enthusiasts all week,” said Mr. Hames.

Since Holden closed being the last manufacturer to stop producing cars in Australia, there has been an ever-increasing race to capture Holden vehicles and the nostalgia that rides with them.

“We have seen a huge demand for Holden vehicles particularly HSV since the closure of Holden and we encourage anyone who might be looking to sell their vehicle to give us a call right now,” said Mr. Hames.