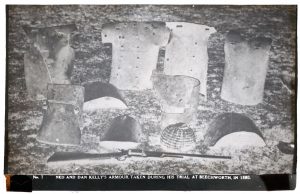 In a World first, Lloyds Auctions mint NFT’s to offer blockchain proof of ownership on arguably the most significant photographic collection in our Nation’s history.

“We have taken considerable measures and invested heavily in state-of-the-art technology in order to honour the owners of one of the most significant photographic collections in Australian history,” said Mr Lee Hames, Chief Operations Office for Lloyds Auctions.

This auction celebrates moments in time from the Rose Stereograph Company, a collection of original glass plate negatives from over 140 years of operation. Literally thousands of original glass negatives capture extraordinary moments of not only Australian but World history and some that may even change the course of history.

All physical glass plate negatives being auctioned have also been minted as an NFT (Non-Fungible Token). The ownership of the NFT will transfer to the highest bidder at the conclusion of this auction.

“An NFT is an item of value stored on an internet technology called blockchain, which certifies that the digital asset is unique and provides irrefutable proof of ownership,” notes Mr Hames. “We believe this technology is a match made in heaven for those wanting to purchase or prove ownership of highly collectable items of value”.

For the very first time, customers can bid for ownership on both the Lloyds Auctions platform and in cryptocurrency on leading NFT marketplaces for rare digital collectibles. Winning bidders will receive ownership of both the minted NFT, along with a tangible one-of-one original glass plate negative.

“We felt it was the right thing to do by this collection, to digitise and secure such a significant piece of history to the blockchain for future custodians to appreciate,” said Mr. Lee Hames, Chief Operations Officer for Lloyds Auctions.

“Put it in terms of physical art collecting; anyone can buy a Picasso print, but only one person can own the original. Many people may be unaware that validating original artwork and collectables online is extremely difficult, so NFT’s offer a new era of rights management.” continued Mr. Hames.

There will be several auctions published over the next week leading up until the end of June. If you are looking to browse the collection and own a piece of significant history then head to www.lloydsauctions.com.au