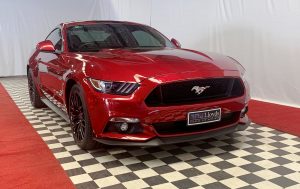 Mustang is the dark horse that keeps on charging…

While other sports cars came to an end the 1980s, the Mustang was a winner for both everyday car nuts and racing enthusiasts alike.

The Mustang entered its fourth generation in 1994 and was produced for a decade. The Mustang was still based on a Fox platform but an updated one at that.

Plus, here’s where the styling and performance really started to return as the Mustang was redesigned to meet the changing demands of auto enthusiasts and consumers in the 1990s.

The Mustang’s ability to keep up with other modern American racing cars is proven by its continuous wins in all styles of drag and track racing.

Without question, the Ford Mustang is one of the greatest brand successes in the motoring industry as well as producing some of the most outstanding vehicles the world has seen.

The fourth generation debuted a brand new look after 15 years of the Fox Body Mustang. It was met with a great response from enthusiasts that were ready for a change and it became an instant hit.

Taking a leaf out the 1960’s Mustang’s book, the new Mustang blended classic style with more modern technology to give fans a lighter, more powerful vehicle.

A stylish interior offered even more luxury for the Mustang, along with improved noise reduction and handling.

This Mustang sported a sharper look with higher wheel wells and an engine that was even more powerful than the years before, further increasing its appeal to the racing crowd.

A newer split-port induction style system brought the new Mustang close to 200hp and saw the Mustang return to the sports car spotlight.

In April, Ford unveiled a special 35th Anniversary edition of the 1999 Mustang and a prototype version of the 2000 Ford SVT Mustang Cobra R.

When the limited edition 2000 SVT Mustang Cobra R burst onto the scene, it was the fastest factory Mustang ever produced.

It boasted a powerful 5.4L DOHC V8 engine that gave it 385hp and was also stripped of any feature deemed unnecessary for racing.

The Cobra R said goodbye to air con, a radio and even a backseat to keep it light and primed for the track.

Exclusively available in Performance Red for the exterior and Dark Charcoal for the interior, a mere 300 units were made making the 2000 Mustang Cobra R one of the rarest Mustangs ever.

The fourth generation of Mustang was sold in Australia between 2001 and 2002, to compete against the Holden Monaro.

In total, just 377 Mustangs were sold in Australia between 2001–2003 due to them being so expensive!

Here comes the fifth generation of Mustang aka the S197 generation! It offered several different models including the GT, Boss, Shelby, and Bullit.

The Bullit model is inspired by the Highland Green GT-390 fastback Mustang in the classic film Bullit, from 1968 and was even built to sound similar to the classic model too.

In 2005, Ford decided to return to roots, and designed the new Mustang to look more like the classic Mustangs of the 1960s and were described as “retro-futurism” by the Senior Vice President of Design, J. Mays.

It appealed both to people who had grown up with first generation Mustangs and those who loved the old style but wanted more modern safety features like airbags in their car.

This was also the first year that the Mustang was manufactured at the iconic Flat Rock assembly plant.

Then after a long-awaited reappearance, the Shelby’s finally made their return.

The 2007 Ford Shelby GT500 was based on the new S197 Mustang platform and came equipped with a 500hp supercharged version of the 5.4L V8, 6-speed manual transmission, suspension tuning, a body kit and 18-inch wheels.

All Shelby Mustangs now are known by the cobra logo found on the front grill of the car, a nod to the original Cobra cars Carroll Shelby first developed with Ford.

The Mustang engine were revised for 2011 and was designed to compete with fellow big players like Chevy and Dodge.

Ford debuted its own V8 engine known as the ‘Coyote’ that was built as a Mustang performance engine producing 412hp at 6,500 rpm in the 2011 Mustang GT.

In 2015 the sixth generation Mustang showed off a new design that incorporated even more of the classic Mustang style but had a newfound focus on making the car competitive on the racetrack.

2015 was the first time Ford started selling the Mustang in the international market and nearly every inch of the Mustang was brand new and much sleeker.

The fastback styling that was so distinctive in the 1960s and 1970s also made a return. Technology was starting to play a big part in the production of the Mustang with dual zone climate control, ambient lighting, and heated and cooled leather seats.

Other optional features included a nine-speaker sound system with an amplifier, as well as the SYNC MyFord Touch system with 8’’ LCD touchscreen that could be activated with voice commands, the customisable touch screen display or buttons on the steering wheel.

The GT350R also featured the Voodoo engine but, true to form, was stripped of all extras including air conditioning, stereo, trunk floorboard, carpeting, the rear seat, and backup camera.

The 2018 Mustang received its first major makeover since 2015 including an aggressive front end and revised rear bumper with quad exhaust tips.

This year, Ford introduced the long-awaited 2019 Mustang Bullitt that is a modern interpretation of the iconic car.

But of course, the biggest recent Mustang news is the soon to be released 2020 GT500.

Boasting 760 hp and a redline of 7,500 RPMs, makes the Shelby GT500’s motor both the torquiest and most powerful supercharged V8 currently in production!

The engine is a modified Voodoo engine that is used in the GT350 and has been codenamed the ‘Predator’.

It was announced earlier this year that Ford will be phasing out sedans and compact cars and the Ford Mustang will be one of only two standard cars they will continue sell after the transition.

The Ford Mustang is seen as the “soul of the company”, according to Ford’s marketing manager, Jason Mase.