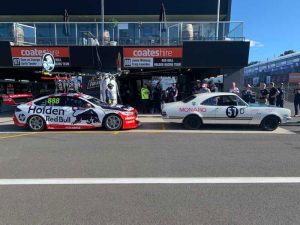 “It’s been 50 years since the HT Monaro’s commenced the Holden dynasty, a new era for the Holden Dealer Team on the mountain,” said Mr. Lee Hames, Chief Operations Officer for Lloyds Auctions.

Red Bull Holden Racing Team conducted a tyre change challenge for television on Wednesday, going old school on 57D against their current supercar to see how times have changed.

Weekend coverage also includes Craig Lowndes driving the 57D 1969 HT Monaro in a nostalgic lap around the track in front of thousands of spectators.

Extremely rare Holden Dealer Team race cars are on display with Lloyds Auctions at the Bathurst 1000, attracting the attention of Holden race fans Nationwide on their 50th anniversary.

“To celebrate Lloyds have teamed up with HDT and the Brock’s with 42D, 64D and 57D all on display at our stand. We encourage everyone heading to Mount Panorama to come down and check out these cars together for this rare occasion,” said Mr. Hames

“Two of the cars have been through our auctions previously, with 57D having achieved just over half a million at auction about 18 months ago. This was the car that Ian Tate, HDT Head Mechanic says they would never have won Bathurst without,” continued Mr. Hames.

In a weekend to remember, Jeff Thomson World’s Fastest Bowler will also be attending the Bathurst 1000 with Lloyds Auctions, reminiscing ‘the good old days’ of racing.

In true Holden fashion the HDT bus, home to many team parties, is also on display alongside the HDT cars truly representing the year of 1969 and sending Holden lovers into a sensory overload.

Bev Brock is also excited to be launching her brand-new book with signing opportunities from the HDT Bus.

Lloyds Auctions will continue to display the cars over the Bathurst 1000 weekend for what could be the final opportunity to see these special Holden’s together for the last time.