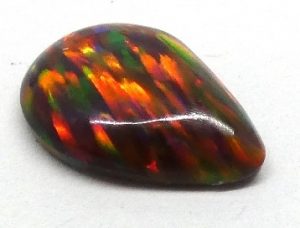 Throughout much of history, Opals were considered good luck and magical gemstones because of their play of colours.

There are two basic classes of Opal, precious and common. ‘Precious’ gem Opal displays the famous play-of-colour and the ‘common’ Opal does not.

The Opal is a birthstone for the month of October and represents the 14th wedding anniversaries. Opal can symbolise hope and innocence but also faithfulness and confidence.

Opal is formed from a solution of silicon dioxide and water. As water runs down through the earth, it picks up silica from sandstone and carries this silica solution into cracks and voids, caused by natural faults or decomposing fossils.

As the water evaporates, it leaves behind the silica. This cycle repeats over very long periods of time, and eventually, Opal is formed from the silica over millions of years.

Opal contains every colour of the spectrum, from the deepest blues and bright greens, through to golden oranges, reds and intense purples. The colours can be pale and gentle or dark and vivid.

95% of the world’s opals come from Australia!

9 hours inland of Adelaide, there is a small town nestled amidst dry desert, by the name of Coober Pedy.

This is a town that lives almost entirely underground to escape the sweltering summer heat. But Coober Pedy is particularly famous for sourcing some of Australia’s most beautiful Opals and is often referred to as the ‘Opal Capital of the World’.

In January 1915, a small group of men had been unsuccessfully searching for gold just south of Coober Pedy.

On the 1st of February, they had set up camp and were searching for water when the youngest member of the group, 15-year-old William Hutchison, found pieces of surface Opal. Eight days later, the first Opal claim was announced.

The most common Opal found in Coober Pedy is a Milky Opal. Milky Opal is an opaque white Opal, with the colours visible on the surface only. Opals with a base tone ranging from colourless to medium grey are called light Opal. A crystal Opal is a transparent light Opal, the colours being visible from inside the stone.

The world's largest and most valuable gem Opal was found in 1956 in Coober Pedy. It was named the “Olympic Australis” in honour of the Olympic Games which were held in Melbourne that same year. It has been left untouched and weighs 17,000 carats (3.4 kg). It is on display in an Opal jeweller in Sydney and is even in the Guinness Book of records!

According to Aboriginal legend, a rainbow fell on the earth bringing with it their ancestor and leaving behind rainbow coloured rocks in Coober Pedy, which are now known as Opals.

The Opal is Australia’s national gemstone!

Lightning Ridge is a small New South Wales outback town, 9 hours inland of Brisbane and Sydney, that sits very close to the Queensland border. It is said that it got its name from a fierce lightning storm that killed a shepherd, his dog and 200 sheep while they tried to shelter under a ridge.

But Lightning Ridge is world famous for its very special and unique, darker variety of Opal and is now known as the ‘Black Opal Capital of the World’.

In the drought of 1902, Charles Nettleton walked the exhausting 700 kilometres from White Cliffs to Lightning Ridge when he heard rumours of a black Opal being found there. He walked back to White Cliff to sell the black Opal and in 1905 the first mining shafts were dug. Charles Nettleton is regarded as the father of Black Opal Mining and has a life-size bronze statue in the main street of Lightning Ridge to commemorate him!

Most Opal at Lightning Ridge is found between 6 and 18 metres from the surface and, unlike ordinary Opals, the black Opal has carbon and iron oxide trace elements in it. Easily distinguished by the blackness of the background "body tone" or body colour, black Opal can be crystal or opaque just like white Opal.

There is an Aboriginal explanation for the black Opals discovered in the Lightning Ridge area. According to legend, a huge wheel of fire fell to earth and scattered the countryside with rainbow stones.

The ultimate Black/dark Opal would be one with bright flashes of red, as this is extremely rare!

The Queensland Opal fields are found within the Winton Formation, which is a range of sedimentary rock that stretches West for about 1000 km from the New South Wales border at Hungerford. Opal was discovered very early in Queensland, at Listowel Downs in 1869.
Unique to Queensland is boulder Opal, a distinctive type of Opal which is found attached to a host rock of ironstone. The boulder Opal is usually cut with the natural ironstone attachment still intact which makes it very different to any other kind.

The Opal in a Boulder Opal occurs as a filling or lining between layers or in cracks in the ironstone. Or it can sometimes be found as a small kernel or nut (especially in the Yowah Opal field), but it is very rare to see a good play of colour in these. Matrix Opal is where the Opal appears in a network of veins or fills the tiny spaces between grains of the ironstone.

Boulder Opal can be black or light depending on the appearance of the stone when viewed from the surface. It is very popular with custom jewellery designers as every piece is extremely unique because of the different patterns and texture of Opal amongst the ironstone!

Keep an eye out for what are known as, Doublets and Triplets, that can be mistaken for Boulder Opal to the untrained eye! A doublet is created when a layer of precious Opal is glued by man to a backing that is strong. Usually it is ironstone as the Opal is too thin and weak to be presented by itself.

Do you want your very own piece of magic, naturally created right here in Australia?

Then register here to receive alerts direct to your inbox for our Affordable Opals and Gemstones Auctions.