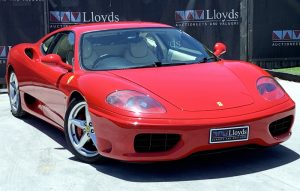 Since the COVID-19 pandemic used cars have seen to hit the turbo button achieving record prices right around the country, however prestige and classic vehicles have really hit the nitrous button.

“As we have seen less people using public transport creating a boom in used cars prices, we are actually seeing that people are not spending as much money travelling or on entertainment,” said Mr. Hames, Chief Operations Officer for Lloyds Auctions.

“This is resulting in more and more people investing on perhaps their dream luxury car or that memorable classic their family once drove around,” said Mr. Hames.

“More than ever, people are reminiscing on those ‘good old days’ or looking forward to fast tracking those childhood dreams, as uncertainty across many sectors has been felt and probably will continue to do so in the coming months,” Mr. Hames said.

Lloyds Auctions have seen a spike in the market with their latest auction boom category earlier this week resulting in Tesla’s, Porsches, Ferraris, Jaguar and Mercedes-Benz all featuring under the hammer as just some of the highlights.

This weekend Lloyds will be auctioning classic cars for those who reminisce about the good old days when their parents once drove them to the corner store for ice-cream.

The auction features some extremely rare Ford Falcons including a GTHO Phase I and Phase II along with a Blue Meanie Commodore.

“Back in the 1960’s and 60’s these Ford Falcons sold brand new for between $4 and $5K and now some 50 years later they are breaking records and achieving 7 figures at auction,” said Mr. Hames.

“These cars rarely come to market and exceedingly difficult to find so when one comes up for auction, we see normally see an interest spike right away as the demand for these cars is just so massive with everyone trying to get their hands on one, but with the COVID boom it’s hit another level” said Mr. Hames.

For those Luxury Vehicle buyers there’s something in this auction on Saturday for you too including Ferrari’s, Porsche’s, Mercedes-Benz and Bentley.

The auction ends from this Saturday at midday QLD time and can be watched online via the Lloyds Website or Facebook Page.