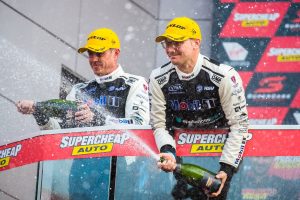 The WAUR car that came 3rd at the Bathurst 1000 less than 2 weeks ago is now up for auction, including a behind-the-scenes team experience for the new owner throughout the 2020 Supercars season.

“To own a Walkinshaw Andretti United built and prepared car is a rare opportunity, so it’s thrilling to be able to give the public the chance, especially a car with so much significance. Not only that, but the added benefits mean that the owner will be part of our team, as their car takes the track,” commented Bruce Stewart, Co-Team Principal of Walkinshaw Andretti United Racing.

“This time last year Lloyds Auctions sold Scott Pye’s #2 Supercar (Chassis 24) on the eve of its podium finish at Bathurst. No doubt we will also see significant interest in this car that has already had its value cemented in the record books by James Courtney & Jack Perkins at Mt Panorama,” said Mr. Lee Hames Chief Operations Officer for Lloyds Auctions.

“This car has driven to multiple podium finishes throughout its history and is a unique opportunity for any enthusiast who has dreamed of being part of a World-renowned race team,” Mr. Hames continued.

Great for collectors and racers alike, it will be sold as a rolling chassis, with the car being delivered at the conclusion of the 2020 Supercars season as per the specification that started the 2019 season. The new owner will have the choice of selecting any livery which appeared on the car during its 2019-20 seasons.

The winning bidder will also be entitled to special behind the scenes benefits with the team during the 2020 Supercars Championship including, entries to the track with all-access entry, hot laps, damaged race car panels from the season signed by the drivers and hospitality passes at the Bathurst 1000 team suite.

This WAUR ZB Commodore Chassis can also be converted back to VF spec to run in the Super 2 racing series, presenting an attractive investment opportunity with undoubted provenance for other categories.

“With the classic car market going from strength to strength, race teams are increasingly providing a pre-sale opportunity to own their cars whilst providing exceptional value and experiences for buyers” said Mr. Hames.

The race car can be found in the Lloyds Classic Car Auction closing on Monday the 28th of October at 6pm, which also features Mustangs, Corvette’s, Torana’s, Ferrari’s and more. Bidding is online starting from just $1 at www.lloydsauctions.com.au.