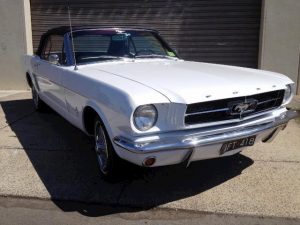 The stampede is coming… Join the Mustang Mob or be trampled!

The Ford Mustang burst onto the American car scene in March 1964 and hasn’t left the minds of motoring enthusiasts ever since.

Ford had their expectations set low, considering their goal of selling 100,000 Mustangs in their first year was surpassed just three months in, and they saw a whopping 1 million cars built in less than two years to keep up with the demand!

Creating a new class of automobile, the ‘pony car’, the Mustang is the only original model to remain in uninterrupted production over the span of the last five decades.

A pony car can be defined as an affordable, compact, highly styled coupe or convertible with a sporty image. As of August 2018, over 10 million Mustangs had been produced in America, which goes to show just how revolutionary this new style was and how wildly popular it continues to be!

It all started in March 1964 with the first-generation Ford Mustang which was in production until 1973. The official introduction was on April 17 at the 1964 World’s Fair.

Since it was introduced four months before the normal start of the 1965 production year the very first Mustangs are widely referred to as the 1964½ model by its enthusiasts.

This Mustang, which was available as a coupe or convertible, featured chrome wrap-around bumpers, a lengthened hood, and a shortened rear deck. It was a breath of fresh air for the American motoring industry!

Led by Ford’s general manager, Lee lacocca, the design teams were given goals for the design of the Mustang; It would seat four, have bucket seats and a floor mounted shifter, weigh no more than 1,100 kg and be no more than 5 m in length, sell for less than $2,500USD, and have multiple power, comfort, and luxury options.

Essentially, it was a fast, yet affordable, two-door car that many would argue the current Mustangs still are!

The first Mustang was sold for the incredible price of $2,368 which was made possible by basing its manufacturing on components that were already in production for other Ford vehicles. For example, the hardtop model used a “U-code” 2.8L straight-6 engine borrowed from the Ford Falcon!

The Mustang made its big screen debut early its illustrious film career when a white Mustang convertible featured in the 1964 Bond film, Goldfinger.

Once the official 1965 year of production commenced, the Mustang received a few updates including the addition of back-up lights on some models, alternators to replace generators, an upgrade of the six-cylinder engine from 2.8L to 3.3L and an upgrade of the V8 engine 4.3L to 4.7L with an increase from 164 to 210HP!

The ‘GT Equipment Package’ was then released which included a V8 engine, grille-mounted fog lamps, rocker panel stripes, and disc brakes. This GT option was only around until 1969 but then made a reappearance in 1982.

Lee lacocca wasn’t done there. In January 1965 he approached automotive designer and racing driver, Carroll Shelby, to make a mass-produced Mustang that was ready for the racetrack!

Available only in the fastback body version and approved by the Sports Car Club of America for class B Production racing, the Shelby GT350 was born.

The 1966 model of the Mustang came with some changes to its aesthetic including a new grill that sported chrome edges and horizontal inserts, rather than the original honeycomb pattern.

The now famous, running horse logo, lost its feature lines and took on a more streamlined look and the interior could now be designed in a choice of a staggering 34 colours and styles!

1967 also saw the introduction of the Shelby Mustang GT500 which was equipped with the ‘Cobra Le Mans’ V8 engine and was the first American car to come with a factory roll bar. Just a little over 2,000 of these vehicles were produced making it one of the more valuable and legendary Mustangs out there today.

Just last year, Lloyds Auctions were honoured to partner with one of NRL’s greatest legends, Johnathan Thurston, to help him achieve one of his lifelong goals of owning an Eleanor Mustang!

All Shelby Mustangs now are known by the cobra logo found on the front grill of the car, a nod to the original Ford-powered AC Cobra cars Carroll Shelby first developed.

The 1968 Mustang models received revised side scoops, steering wheel, and petrol caps. Side marker lights and an AM/FM radio were also added, and for the first time a Mustang featured shoulder seatbelts in the front seats.

Never far from the silver screen, the most famous 1968 Mustang was the GT390 fastback driven by Steve McQueen in the movie, Bullitt.

Starting in 1969, a variety of new performance and decorative options became available, including functional (and non-functional) air scoops, cable and pin hood tie downs, and both wing and chin spoilers.

Additionally, a variety of performance packages were introduced that included the Mach 1, the Boss 302, and Boss 429.

The 1969 Mustang is renowned for its ‘aggressive’ design and styling, some of which included quad headlights.

Even though there were fears this was too hard-hitting and that sales would suffer, the 1969 model outsold the ‘softer’ 1970 Mustang which featured the return of the standard headlights and a wider grill was installed.

With each revision, the Mustang saw an increase in overall dimensions and in engine power. The 1971 model saw a drastic redesign to its predecessors.

The first-generation Ford Mustang finally wrapped up production in 1973, making way for the Mustang II.

Lee Iacocca became President of Ford Motor Company in 1970 and had ordered a smaller, more fuel-efficient Mustang for 1974, creating the Mustang II. This new car had no common components with the preceding models.

This smaller Mustang II came at the ideal time as Ford was prepared in advance for the 1973 oil crisis. During its first year, the 385,993 units of the Mustang II were manufactured.

But even though it was a smaller car, it was also heavier, because of the new equipment needed to meet new emission and safety regulations. All Mustangs in this generation did feature frameless door glass, however!

The 1974 Mustang was available in coupe and hatchback versions, including a “luxury” Ghia model.

1974 Ford Mustang Ghia was one of the first of what would be many collaborations between Ford and the legendary Italian design house, Carrozzeria Ghia.

Engines for the 1974 models included the 2.3 L I-4 and the 2.8L Cologne V6. The 1975 model year reintroduced 4.9L Windsor V8 that was only available with the C-4 automatic transmission, power brakes, and power steering. This continued through production end in 1978.

Further changes introduced for 1975 included the “MPG” model which had a different rear axle ratio for better fuel economy.

In 1978, the limited edition “King Cobra” Mustang became available with only 4,313 units produced. It featured a deep air-dam, stripes, and a cobra snake decal on the hood. The King Cobra was available only with a V8 engine as Mustang tried to claim back their performance car image!