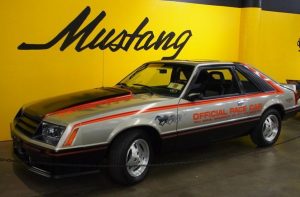 Creating a new class of automobile, the ‘pony car’, the Mustang is the only original model to remain in uninterrupted production over the span of the last five decades.

As of August 2018, over 10 million Mustangs had been produced in America, which goes to show just how revolutionary this new style was and how wildly popular it continues to be!

The Mustang entered its third generation in 1979 and was produced until 1993. This was the longest reigning generation of Mustang so far, though there were several significant body updates, and a number of sub-models, trim levels, and drivetrain combinations during this era.

This era is one of the most famous for the Mustang as its revolutionary Fox body design strayed completely from the previous Mustangs we had come to know and love.

The Vice President of Design at Ford Europe, Jack Telnack, was heavily involved in the concept for the third generation of Mustang and as a third of the design team resided in Ghia studio in Italy, it’s no surprise that the American classic received some European influence.

The Fox Body was something new entirely and many people have fond memories of it. The Fox Body definitely made a name for itself throughout its 14 year production.

The term Fox Body comes from the chassis the third generation Mustang was built on.

This new chassis was an attempt at making a one size fits all car as it was first used by the four door Ford Fairmont in 1978 before the platform became a two door sports car in the form of a Mustang.

Being built on a larger platform gave passengers even more interior space, further increasing the Mustang’s appeal to families.

Body styles for the 1979 Mustang included a coupe (notchback) and hatchback alongside two trim options; the base model and the more luxurious Ghia model.

The most distinctive feature in the 1979-1986 Mustangs was the angled back front end and four rectangular headlights. This style got the fond nickname “Four Eyes” from enthusiasts before the Mustang’s front adopted a more “Aero look” in 1987.

The Cobra appearance package also made its debut in 1979 and would continue through both the 1980 and 1981 model years.

It featured a black grill, trim and mouldings as well as black lower body paint. The door handles, locks, antenna, and roof drip rail were all bright coloured.

Even so, the Ford Mustang was chosen as the Official Pace Car of the 1979 Indianapolis 500. Ford celebrated by releasing 10,478 Pace Car versions of the Mustang to the public.

The Boss is back! The Mustang GT made its return 1982 after more than a decade and was designed with high power in mind.

Boasting a 157hp 5.0L engine that outdid any other Mustang on the market. It also featured a smaller hood scoop, front air dam with fog lamps and the rear spoiler from the 1979 Pace Car and the 1980 and 1981 Cobras.

The Mustang GT also formed the base for the Special Service Package cars that were used by the police and government in America.

Though this GT was celebrated, it did mean a temporary retirement for the Cobra Package.

It seemed Mustang were in favour of bringing back old favourites as the Mustang convertible was made available in 1983 after a 9 year break from the market.

This was also the first year Mustang used the “Blue Oval” Ford emblem on both the front and rear.

1984 saw an important milestone for the Ford Mustang… Its 20th Anniversary! A special V8 powered Mustang GT was created to commemorate the achievement. It was a limited edition with only 5,260 hatchback and convertible models built, all in Oxford White with a Canyon Red interior.

With a mix of unique appearance options in addition to performance features, these exclusive Mustangs prove to be very popular.

Australian Group A driver, Dick Johnson, bought two Mustangs built by the German Zakspeed team in mid-1984 for use through the 1985/86 Australian Touring Car seasons.

The introduction of the Mustang SVO also came in 1984 showcasing a 2.3L turbocharged four-cylinder engine that was as powerful as the GT V8, but considerably lighter and more efficient.

With power came bigger brakes, SVO-specific suspension with larger anti-roll bars on both axles, and an upgraded steering rack so the new Mustang could easily handle the speed it could produce.

16 inch wheels and an SVO-specific bi-plane rear spoiler further distinguished the SVO from the rest of the Mustang line.

For 1986, Ford released the first multiport fuel-injected 4.9L V8 that could produce at 200hp.

This was also the year that saw sales hit a decade-high, totalling 224,410 for the model year. This proved the Fox Body as a hit among American muscle car enthusiasts.

But in the scheme of things, this was still minimal compared to previous numbers and Ford decided they need to shake things up.

Then came the announcement that threw Americans into a frenzy… Ford were replacing the rear-wheel drive Mustang with a Mazda-derived front-wheel-drive version.

The all-American Mustang was going to be based on a Japanese car and built by a Japanese company, move to front-wheel drive and lose its V8 engine once again!

The public outcry that ensued forced Ford to re-think their decision. The Mustang continued as we know it and in 1988 saw the release of the Ford Probe; the eventual result of Ford’s collaboration with Mazda.

Ford were obviously looking to make changes to the Mustang so by 1987, it was again time for Mustang to evolve with the changing market.

Designers gave the Fox Body a makeover with new “aero-look” design, similar to the SVO and kept with Ford’s overall modern styling direction.

The interior received an all new dash, centre console, updated seat and door trim and the engine was a 5.0-liter V8 with 225hp.

As we said, Ford loves an anniversary. To celebrate the Mustang’s 25th Birthday, every one produced between April 1989 and April 1990 displayed the famous running horse logo on the dashboard with “25 Years” inscribed underneath.

Ford announced a “Special Edition” 5.0L convertible in January 1990 which featured a Deep Emerald Green clearcoat metallic paint and a white leather interior. It also borrowed the aluminium wheels and sport bucket seats from the GT.

To go with this Special Edition, there was also the Special Value Package as an add-on, which consisted of air conditioning, a premium AM/FM cassette stereo, and a clock.

This Special Edition Mustang was created for a ‘7-Up’ soft drink promotion, where fans had to sink a half-court shot at the NCAA basketball finals.

However, it was cancelled last minute but that didn’t stop Ford from producing about 3,700 “Special Edition” Mustang convertibles between 1989 and 1990.

The last year of the Fox Body Mustang saw the return of the Cobra but that’s not all. Ford’s new Special Vehicle Team (SVT) introduced the limited-production SVT Mustang Cobra and SVT Cobra R.

The Cobra R was originally developed as a race car and sold out prior to production. All 107 Mustang SVT Cobra Rs were sold to licensed racers.

It came with no back seat, no air conditioning, and no power accessories in order to cut back curb weight by 27kgs.