Are you a few classics short of your dream collection? 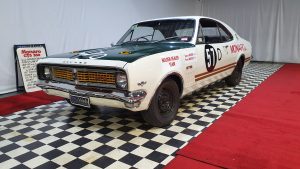 Are you a few classics short of your dream collection?

We show you some of our favourite Australian Classics from the upcoming Rare & Exotic Museum Classics Auction!

With so many classic cars manufactured right here in our own backyard over the years, Australia certainly has its fair share of petrolheads and classic car enthusiasts!

Certainly, we can all agree that General Motors’ unexpected announcement last year that the Holden brand would be retired by 2021, was a sad time for the Australian auto industry.

Of course, our Rare & Exotic Museum Classics auction is going to feature some true blue Aussie classics. Over 20 of them in fact!

This is a rare opportunity to see a collection of iconic names and models together like Ford Falcon, Holden HT Monaro, Holden Kingswood and of course, the Holden Torana A9X. We have chosen four of our favourites as a taster of what is to come in this incredible auction.

This is a very special car that we were extremely proud to be able to share with the Holden fans and racing enthusiasts at Bathurst last year.

This was the very first HDT Monaro raced in Sandown by Kevin Bartlett and Spencer Martin, in the months leading up to Bathurst in ’69. During its first race, this HT Monaro GTS 350 crashed into the wall and burst into flames.

HDT then went on to homologate a series of changes before the cars went to Bathurst and successfully won first, third and sixth place, launching the HDT dynasty.

HDT’s Head Mechanic from this era, Ian Tate, joined us at last year’s Great Race to celebrate the 50th Anniversary and said if it weren’t for 57D hitting the wall at Sandown, HDT wouldn’t have won at Bathurst in 1969!

This car is a hugely significant piece of Australian motorsport history which not only shaped the success of Holden as a company but also set the stage for domination by Holden and Peter Brock for the next two decades.

Torana is one of the most iconic shapes in Australian automotive history, but this one is even more special than that. This is the very first Holden Torana SLR5000 A9X ever produced.

The very first A9X sedan off the production line (06/09/1977) this car bears the lowest PSN (Production Serial Number or Plant Sequence Number) of all 500 sedan and hatch A9Xs ever made.

After its press duties were fulfilled, IYL 155 was sold from Penfold Holden in Burwood, Victoria where between 1981 and 1984 it passed through several owners that have been documented, along with all known owners from 1984 to the present day.

All tags and body number are correct, its provenance is detailed and well documented (all of which comes with the car) and it represents the very best model Holden produced in the 1970s.

Toranas don’t get any more iconic than this car and it represents an investment that will only increase with time. This is a once in a lifetime opportunity!

Originally sold by Southland Chrysler in November of ’73, this is a Special Order Accepted Charger (SOA 394 as per stamp on chassis). A SOA was a way of getting a Valiant built to your own specifications outside of the usual options sheet.

This beauty was initially ordered with 4 speed manual transmission with floor gearshift and the Sports Package that includes a "Regal" instrument cluster, 3 spoke sports steering wheel, painted body stripe and wheel covers. And that is just the tip of iceberg…

There is much more to this Charger than meets the eye… It is quite possibly the very last Charger E49 to roll off the production line at Tonsley Park! It is also said to be the fastest and highest horsepower by Chrysler that came out of the South Australia factory.

This vehicle has undergone a minor restoration through Elko's in Victoria and presents in excellent condition inside and out. A bit of celebrity, this stunner also featured in Australian Muscle Car Magazine Issue #95.

1 of only 1 E49 VJ Sunfire MetallicParchment trim Chargers built, this is a rare and unique investment opportunity and a true piece of Aussie muscle car history!

Bold and brash, HSV’s original GTS-R was an acquired taste that has since become a collector’s hot topic. With only 85 built, and 10 exported to New Zealand, these cars are obviously very hard to find!

Looking like a V8 Supercar for the road with the HRT rear spoiler and side skirt trims, the real attention grabber is the bright ‘XU3 Yellah’ paint job and the charcoal Tri-Spoke mags.

One of the main highlights of the GTS-R is the legendary front-mounted V8 stroker engine which measures 5737cc. It is the most impressive version of the Australian made Holden V8 engine ever built and suddenly made the five-litre engine the little brother of the pack.

At 4800rpm producing 215Kw of power, at the time this was a hell of a thing! The VS series II of 1996 introduced HSV's "Integrated Security System" (ISS) as standard, which featured an immobiliser and different electronics configuration for each car produced to deter theft.

If you are looking for one of the rarest Holdens out there, then this is it! They really are a collector’s item. Any real Holden, SV, or HSV collection would not be the same without one.