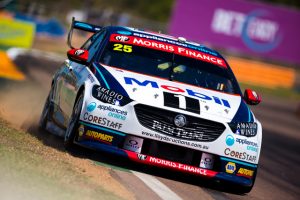 Imagine owning a supercar that could take the checkered flag at Bathurst and experience the 2021 Supercars season in style, as a current race car owner.

Walkinshaw Andretti United’s Chassis 25 currently being driven in the Supercars series by Chaz Mostert is up for auction this weekend on the eve of the Bathurst 1000 great race.

“The value of Scott Pye’s former WAU chassis doubled in a matter of days, after being sold at auction on the eve of its podium finish at Bathurst 2018. This is an amazing opportunity for motorsport fans to own a piece of racing history and experience the team environment behind the scenes of the 2021 Supercars season,” said Mr. Lee Hames, Chief Operations Officer for Lloyds Auctions.

“It’s extremely exciting to once again be offering the opportunity to purchase a Supercar to the public, especially one that will go down in the history books,” continued Mr. Stewart.

“We were the first team in Supercars to offer the pre-sale opportunity, and after the success and interest it generated, we are delighted to do it again through a known and trusted auctioneer in Lloyds Auctions,” he continued.

Chassis 25 is the first to be driven by Chaz Mostert upon joining the team and is also the very first Holden Supercar driven in his career – a car to be remembered and treasured as a piece of history.

The chassis will be delivered to the winning bidder at the completion of the 2021 Supercars season, with the selection of any livery appearing on the car during the 2020/2021 season and in the meantime a chance to enjoy the experience as a Supercar owner.

“The new owner will be entitled to special benefits including hot laps, GA and Paddock access and signed panels,” said Mr. Hames.

You can Bid Now on Chassis #25, Chaz’s first Holden supercar with Walkinshaw Andretti United Racing at www.lloydsauctions.com.au. The auction closes on the eve of this year’s great Bathurst race, this Friday the 16th of October at 7pm.