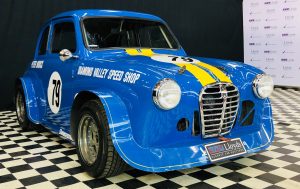 Neil Brock, Peter’s brother, used his Box Brownie camera to record the iconic images of his younger brother, sliding around the family’s farm in an Austin 7 paddock bomb. These images were the first that captured the driving skill of the young boy who would grow into Australia’s greatest racing driver.

The 1966 Gallagher 500 was Peter Brock’s first trip to Bathurst’s Mount Panorama as a spectator. He left captivated by The Mountain with a burning desire to go motor racing and later that year began the search for a suitable car.

Brock made his racing debut in the A30 at Winton in rural Victoria in November 1967 but failed to finish the race!

Peter Brock is often identified with simply being a touring car driver but he jumped at the opportunity to drive other impressive race cars, and with great success.

In ’82 and ’83, Bob Jane recruited Brock to race his Chevrolet Monza, in and around Brock’s existing Holden Dealer Team Commodore racing commitments.

In 2002 Brock had been retired from full-time racing for five years… but his love of The Mountain had never really gone away. His return to Bathurst was October that year.

His last ever lap in The Great Race was completed in 2m55s, one second slower than the fastest lap he recorded on debut with the Monaro GTS 350 in 1969!

This is Peter Brock’s very first car! Brock purchased the unloved Austin 7 from a local school teacher in 1957 for the equivalent of $10 in today’s money.

The first thing Brock did to the car was cut the body off using his mother’s axe as the mechanical components were of far more interest to him than the rest of the car.

Young Peter couldn’t quite work out the brakes, so he got rid of them. Slowing down would therefore become a process of changing down gears and sliding sideways to a halt.

Brock rebuilt the Austin’s engine on the floor of the bedroom that he shared with older brother Neil, the oil stains from this overhaul remain embedded in the floorboards of the Hurstbridge house to this day.

This is the little Austin A30 that made Brocky famous in the late sixties.

When he bought the original car, he fit a Holden engine in it and went out and raced in sports events in Australia. From 102 starts the car got 102 wins!

Brock said there was one condition for his good friend, Peter Champion building a replica… that he builds it with him! Brock said it needs to be a two-door 1954 A30 and Formula Blue is the colour that he wanted it painted.

Together, Brock and Champion, went to look at this A30 in a shed in Geelong and the owner said he brought this car two kilometres down the road from where Brock was living with his parents.The previous owner told him “whatever you do, don’t let those horrible Brock boys get it. They’ll chop it up into a race car.” and eventually, that is exactly what happened to this car!

This tribute features the grill from the original car which a Brock family member had stored for many years.

Here we have the Chevrolet Monza like the one that Bob Jane had built and entered into the strong Sports Sedan Series.

At the 1983 Adelaide Grand Prix, Brock was in pole position in this car and he took off that fast, that he broke a drive shaft in the back. This car spun around and went straight back into all other cars that were behind it and they all climbed up on top of this little Monza!

The last time this car raced before it came into the collection was at Sandown! Steven Boyd drove it the cams people come along and said he would have to slow down or take it off the track because he was doing 175 miles an hour up the back straight, which is faster than a V8 Supercar today!

This car is ready to go racing so hopefully, somebody will be able to put her back on the track one day and enjoy the moment and relive the history of the early eighties!

Peter Brock’s official record is a staggering nine wins at Mt Panorama, Bathurst. But Brock fans have argued that the 2003 Bathurst 24hr race win should be counted as his 10th win.

But if you were to count all Holden/Brock wins at Bathurst, then this VP SS which Brock raced to a class win (and 8th overall) is Brock’s 10th Bathurst win.

So, whether you think Brock had 9, 10 or even 11 Bathurst wins, the fact is this VP SS is a great marker in the history of Brock at Bathurst driving a Holden and one that is sure to appreciate in the future.

This V8 Supercar is the car that Brocky raced in 2002 and the campaign was “Back to Bathurst” as this was his return from his 1997 retirement from The Mountain.

It represents the last car that Brock properly raced at Bathurst as his HRT car went out of the 2004 Bathurst race in the opening lap!

This was originally a red car decked out in the number 54 for Kiwi driver, Craig Baird, in the V8 Supercar Championship.

It was then painted black for Bathurst and Brock’s famous racing number 05 was also brought out of retirement for the occasion. It certainly turned a lot of heads!

The Team Brock Commodore lost over an hour and a half in the pits with over-heating problems. The team replaced the radiator and Brock was able get the car home in 23rd position.