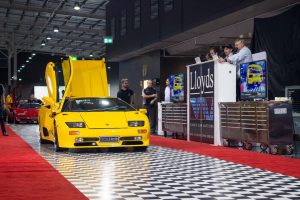 Australian records were broken over the weekend in the Iconic Gosford Classic Car Museum Auction including $1.55 million for an Aston Martin DB5.

With over 2,000 people showing up multiple record car sale prices were broken in Australia for vehicles throughout the auction catalogue.

Approximately 10 records for Australian cars alone were broken for Holden models. Australian market cars weren’t the only ones to break records with both American and more particularly European Luxury indicating that markets are extremely strong here also.

“It’s incredible the amount of people that showed up to the auction, as well as their dedication to watching the spectacular 9-hour live event,” said Jeff Thomson, former Australian Cricketer and world’s fastest bowler.

“The strong amount of bidding and prices achieved for Australian Muscle cars in particular was of great interest to me. I think it is fantastic that the majority of bidders were Australian, meaning the cars stay here,” he continued.

“I am not surprised at the prices achieved in this World-class auction over the weekend attracting international attention. The cars got what they deserve, in a fantastic event which served as a true send-off in what was an emotional day of mixed feelings for both Lloyds Auctions and the Gosford Museum,” Alan continued.

“It was a huge success pulled off by a great team including the staff at the Gosford Museum. I can confirm the owner of the collection is extremely happy with the result,” Lee continued.

With the majority of bidders being Australian it is safe to say that enthusiasts nationwide are extremely proud and passionate people fighting to keep their beloved cars in their country where they can enjoy them.

The world-class event described by many enthusiasts that attended the auction, solidifies Lloyds as a World leader in the European and Prestige car market and proves that Australian car fanatics are as passionate as any.

Lloyds also had a surprise in-store revealing a special upcoming auction during the online live stream where Alan Jones stated that another Walkinshaw Andretti United Supercar, James Courtney’s chassis of #23 is to be auctioned at the end of this month. Head to the www.lloydsauctions.com.au for further details.