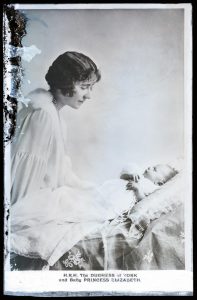 Arguably the very first known pictures taken of Queen Elizabeth II as a baby will be up for auction completely
unreserved tonight sure to attract some international attention.

Images capture moments in time of the Duke & Duchess Of York And Daughter, Princess Elizabeth Alexandra Mary in what may be her very first moments as a baby.

“We believe that these could be the first images captured of Queen Elizabeth II and we wouldn’t be surprised if this auction caught the Royal Family’s attention tonight,” said Mr. Lee Hames, Chief Operations Officer for Lloyds Auctions.

“These are in fact glass negative images of the Queen which means they can be preserved for many years to come and blown up to the size of the opera house should the new owner wish to create portraits from them,” said Mr. Hames.

“This has to be one of the most important photographic collections in Australia if not the world, and all of the glass negatives will be going under the online hammer with no reserve,” continued Mr. Hames.

In a World first, Lloyds Auctions mint NFT’s to offer blockchain proof of ownership on arguably the most significant photographic collection in our Nation’s history.

“We have taken considerable measures and invested heavily in state-of-the-art technology in order to honour the owners of one of the most significant photographic collections in Australian history,” said Mr Lee Hames, Chief Operations Office for Lloyds Auctions.

The images featuring as part of one of the most significant photo collections in Australian history where images will also be offered an NFT Non-Fungible Token). The ownership of the NFT will transfer to the highest bidder at the conclusion of this auction.

“An NFT is an item of value stored on an internet technology called blockchain, which certifies that the digital asset is unique and provides irrefutable proof of ownership,” notes Mr Hames.

“We believe this technology is a match made in heaven for those wanting to purchase or prove ownership of highly collectable items of value”.

The photos feature from the Rose Stereograph Company which was founded in 1880 by George Rose and Herbert Cutts, in the early 20th Century. The pair formed a lifetime working partnership and strong personal friendship.

Assisted by George’s two sons, Herbert George and Walter, and later Herbert’s son, Neil Cutts, the Rose Stereograph Company continued its operations for more than 140 years; and remains an incorporated Australian Company to this day.

The final auction featuring these historic images ends from tonight at 7pm. If you are looking to browse or bid on the
collection and own a piece of significant history then click here.