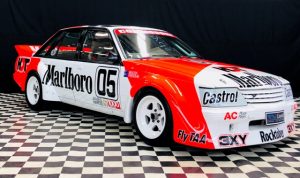 Johnson won the Australian Touring Car Championship in both 1981 and 1982, encouraging Brock and the HDT to wheel out a new weapon, the SS Commodore.

While the new car offered the HDT many refinements, its real advantage lay in its more powerful big-valve engine, combined with the lighter weight of a basic Commodore shell.

The 1984 Bathurst 1000 win completed a hat-trick of Bathurst wins for Brock and Perkins, the second of two hat-tricks Brock achieved at the Mountain.

The Group C era of Australian touring car racing in came to an end in 1984, as the introduction of all-new cars and new international Group A rules came the following year.

The Holden Dealer Team took a unique ‘83 victory with this car being driven by John Harvey, Peter Brock and Larry Perkins.

John Harvey and Phil Brock qualified this car but after their #05 car blew its engine on lap 8, Peter Brock and Perkins transferred themselves into this car and took the win!

This is the most raced car in the collection and it is an ‘82 delivery with an ‘83 spoiler and ‘83 rear deck wing. A great combination of both its Bathurst win years!

This is the first car to race at Bathurst with a camera in it. You can see the camera mount between the roll cage and the transponder in the back parcel tray.

This is the car that Peter Brock’s mate, Peter Champion, took to the 2010 Goodwood Festival of Speed in the UK and famously crashed it into some hay bales. He then worked all night to fix the steering and some panel damage and raced it the next day with a beer carton painted black as a ‘headlight’ replacement.

He won the Spirit of Goodwood Trophy and ironically, the only other Australian to win the award was Brocky himself!

This is the one and only Big Banger, a car that took Peter Brock to a famous win at the Mountain in 1984!

Peter Brock said on many occasions that this car is the most winning Commodore that was ever produced because it won every race in which it was entered in the country before it left the shores and went overseas.

You could argue that this car is the ‘prettiest’ car that’s ever been built as it is not overloaded with sponsors and in striking Day-Glo orange. The most popular race car in Australia’s history, possibly the most popular Commodore ever made. It is the Holy Grail of Motorsport in many people’s eyes.

Peter Brock raced this car up the mountain at Goodwood Festival of Speed in 2005. After being asked to do a ‘wheelie’ by one of the track marshals on the last day (and then complying of course), he moved out of the fourth spot into fifth. So, he ended up coming fifth in car #05 in 2005!

It was 2012 the last time this car returned to the famous Bathurst track. To celebrate Fifty Years of Bathurst, Peter Champion took this car for a few laps that resulted in some much slower times than Brocky’s!