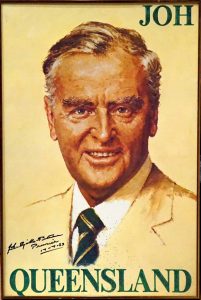 Lloyds Auctions alerted that Premier Sir Joh and Lady Flo Bjelke-Petersen’s estate may not be allowed to leave
Australian soil.

In a last-minute development Lloyds Auctions received contact from the Australian Government over the weekend to state that items from the Bjelke-Petersen Auction could be Australian Protected Objects.

Aimed towards preserving and keeping important history within Australia, Mr Lee Hames, Chief Operations Officer for Lloyds Auctions commended the government’s stance in protecting Australian history for its future. “The items in this auction tell many important stories about Australia’s History and in particularly Queensland’s growth and how it came to be the state it is today, so we applaud the government for reaching out to protect it’s history.”

With the estate to go up for auction this Tuesday night featuring over 800 items with no reserve there have been thousands of bids already with interest from all over the country including New Zealand where Sir Joh was born.

In a final clean-up of the estate over the weekend Sir Joh’s iconic original Stetson Swagger hat was uncovered and added to the auction along with Lady Flo’s black leather Gucci bag and White Gold Mikimoto Pearl earrings.

Sir Joh Bjelke-Petersen was the longest-serving Premier of Queensland for 19 years and is considered by many to be the architect of modern Queensland. His sweeping reforms led to Queensland becoming an economic powerhouse. Joh was knighted by Queen Elizabeth II in 1984.

Lady Florence Bjelke-Petersen served as a Queensland Senator for 12 years, and was loved by all parties. She was an ardent voice for her Queensland constituents and advocated strongly for local issues. “We have come to the end of the era of Joh and Flo’s partnership in which they achieved so much for both Queensland and Australia during their political careers,” commented the Bjelke-Petersen family.

“Therefore as a family we have decided to allow the sale of Dad and Mum’s collection which has been in their home at Bethany for many years. We are sure those who acquire items from this collection will honour and treasure them as much as our whole family has,” the family continued.

The auction features Sir Joh’s personal desk and his briefcase that he used on a daily basis as Premier of Queensland, hand-signed campaign posters and even Sir Joh’s 1982 Jaguar Saloon he once drove.

There is also opportunity to perfect Lady Flo’s famous pumpkin scone recipe which also features in the auction inscribed on a ceramic soup spoon.

“This event is extremely rare, and we feel very privileged to honour and support the Bjelke-Petersen family where they have entrusted us to auction over 800 treasured items each with their own story to tell,” commented Mr. Lee Hames, Chief Operations Officer for Lloyds Auctions.

One of the headline pieces within the auction however is a 1969 hand signed post moon landing world tour luncheon schedule signed by the participants including Neil Armstrong, Buzz Aldrin, John Gorton and numerous other dignitaries to commemorate the historic landing of the first humans to land on the moon.

“The community really have this once in a lifetime chance to become a custodian of a cherished piece of Australian history and share a story that will be remembered forever,” Mr. Hames continued.

Other items that feature in the auction include historical and nautical items, silverware, homewares, glassware, clothing, crockery, art, maps, music, books and many more pieces of Australian history.