In the Community – Vinnie’s CEO Sleepout 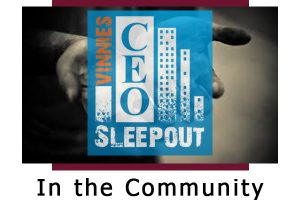 Raising Awareness for Homelessness at the Vinnie’s CEO Sleepout

Lloyds Auctions recognises the importance of giving back to the community. We understand that without team work and the support of people around the Gold Coast and its outer regions, Lloyds would not be what it is today. It is most important to us that, as part of the community, we ensure that we are present in many places.

Every single night in Australia, over 105,000 people will live in miserable and often dangerous conditions on the street. Over half of the homeless population are women and children, and a majority between 25 and 34. This could be your daughter, son, cousin, mother or father – so what would you do to get them off the streets?

Homelessness is often misunderstood and seen as self-circumstance when in fact 24% is due to domestic or family violence and another large percentage is due to lack of affordable housing. Violence and abuse, poor mental health, family breakdown and lease expiry are more factors.

Each year since 2006, St Vincent de Paul Society in Australia has held the CEO Sleepout to raise awareness and funds for homelessness. The CEO Sleepout began when local business leader, Bernard Fehon – Managing Director of Tactical Solutions, decided that Australia was not taking enough action to aid in the reduction of homelessness. The inaugural event was held on June 21 2006 at Sydney Olympic Park. 2010 saw the event rise to a national standard and attracted almost 700 CEOs in 7 cities. They raised nearly $2.9 million to directly assist people experiencing homelessness.

Lloyds Auctions are also very active within the community. In aid of breaking the homelessness cycle, Lloyd’s Auctions Chief Operations Officer Lee Hames volunteered to represent the business this year. Lee participated in the event in 2016 and is convinced that raising awareness about the issue through events such as these is the way forward in providing crucial assistance to those that are forced to experience homelessness.

“Homelessness is a major problem in Australia that needs to be confronted head on. I have a personal connection to people who have experienced lack of basic needs such as food and shelter, so I will continue to pursue this cause and do all that I can for it. I would be extremely thankful for any support that can be given.’ Hames said.

The CEO Sleepout is country wide. Queenslanders raised $1,228,455 in 2016. This directly assisted the homeless through the expansion of youth programs, distribution of food items, ensuring safe sleeping places and establishing a program on the Gold Coast to assist with early intervention.

The money also abetted emergency relief and homeless support centers around Australia. This year on the 22nd of June, the foundation is hoping for more participants than ever to create awareness for this great cause.

Visit www.ceosleepout.org.au for more information on the Vinnies CEO Sleepout