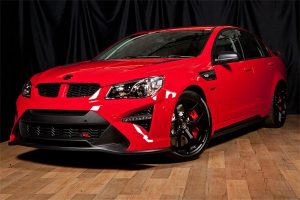 One of the last cars ever produced off the Holden production line in Australia, the GTSR W1, is tipped to get over $300 000 at auction this Saturday.

This rare auction features Holdens which mostly have delivery kilometres only and present in new or nearly new condition with the variety of models on offer far rarer than a standard ClubSport or GTS and Mr. Bill

Freeman from Lloyds Classic Car Division says “$300K will set a new record for the newly released W1.” With the end of local production for our Aussie legends Holden and Ford and the continued merging of models across the globe in the name of cost cutting means those of us who appreciated these home-grown hot sedans, utes and the occasional coupe are still mourning the loss of ‘our’ performance cars. Fortunately, there is light at the end of the tunnel with auctioneers, Lloyds Auctions on the Gold Coast, serving up what is probably the last chance we’ll have of buying the best of what Holden and Ford had to offer from the last few decades.

“This auction has already sparked a lot of interest because of the extreme rarity of these cars, with most in immaculate condition” Mr. Freeman says.

Lloyds is set to auction these cars along with other collectable and classic cars at 69 Manchester Road, Carrara on 16th of December 2017 from 12pm AEST (1pm AEDST). Further information is available at www.lloydsauctions.com.au