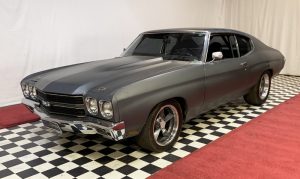 The original Chevelle SS from the blockbuster movies series The Fast and Furious 4 driven by Vin Diesel himself is up for auction this Saturday.

The 2009 action movie from the phenomenon worldwide franchise is to this day one of the highest grossing sagas in Hollywood movie history, and now the opportunity presents itself for an Australian car enthusiast to own a piece of movie history.

“This car was in fact the actual original ‘Hero Car’, driven by Vin Diesel himself on the set of the Fast and Furious 4 movie and was the principle car used whilst shooting the film,” said Mr. Hames Chief Operations Officer for Lloyds Auctions.

“We expect this car to reach 6 figures this Saturday, but what the final figure will be is anyone’s guess as it will be a car to treasure and will go down in history forever,” said Mr. Hames.

The current owner purchased the car from famous singer Jerry Wallace also known as an avid car collector where the car was then imported from America into Australia in late 2012.

The car was left ‘as is’ to honour its role in the original film which comes with the Universal Studio Certificate of Title.

“The car was even signed by Cody Walker, Paul Walker’s brother back in 2015 and has also been submitted with Universal Studio Certificate of Title,” continued Mr. Hames.

This car features as part of a massive online classic car auction happening this Saturday at Lloyds Auctions consisting of over 100 classic cars and bikes with vehicles suited for all budgets ranging from Honda & Kawasaki classic bikes to Porsches & Ferraris.

If you’re interested in owning a piece of motoring history or wanting to live life a quarter mile at a time, then it’s your chance to bid now at www.lloydsauctions.com.au and browse Australian, European and American classic cars all open for bidding online now ending midday Saturday the 26th of September.