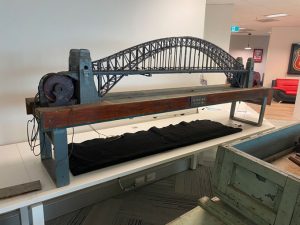 A museum quality piece of Australian History will go under the online hammer tonight featuring an incredible story dating back to the 1940’s during World War II.

“This model is in fact still working about 80 years later, which is just incredible and the accuracy of this build to scale during a time of such uncertainty and before major technological advancements is just phenomenal,” said Mr. Lee Hames, Chief Operations Officer for Lloyds Auctions.

Created between 1941 and 1943 by Italian Lieutenant and POQ, R Trucco, a 1:333 scale model of the Sydney Harbour Bridge that was made out of salvaged materials found from around the Murchison, Victoria POW Camp which will go up for auction tonight.

Accompanied with 25 pages of handwritten letters and handmade original crates this one-of-a-kind piece of history has many stories to tell.

The Italian Lieutenant, R. Trucco was captured at Bardia in 1941 and held at Murchison, Victoria as a prisoner of war.

Little did many know that this Sydney Harbour Bridge model he built would go on in his memory after he returned to Italy.

With no mechanical qualifications he made this remarkable working model of the famous bridge taking him two years to complete.

Made from salvaging materials and improvising on tools it consists of 25,000 separate parts and 50,000 joints, with a very strong eye for detail.

Many creations like this formed from the Victorian War Prisoner Camps however this one is believed to be the best produced.

After the war Lieutenant Trucco wished to take the model home however was prevented from doing so where it was then left to Sergeant William Meredith of Horsham who was a member of the POW military Staff at Murchison during Lieutenant Trucco’s stay in camp.

Sergeant Meredith brought it home to Horsham where he displayed it at district shows and exhibitions in the early post war years.

The item is now listed for public sale via auction for the first time and this is a piece not to be missed out on. Bidding is available now at www.lloydsauctions.com.au with the auction ending from 7pm tonight the 30th of November, 2020.