The House of Bull charges ahead with a car that sets a new benchmark. 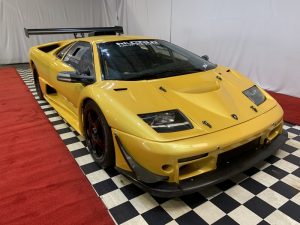 We show you some of our favourite European Classics from the upcoming Rare and Exotic Museum Classics Auction which includes one of Lamborghini’s fastest and rarest model cars!

https://www.youtube.com/watch?v=Yl5YprB64oc We are featuring over 100 very rare and exotic museum classic cars which will attract worldwide attention . This could be the most prestigious Classic Car Auction of 2020 for Australia, given the current circumstances worldwide. So of course, it is going to feature some exotic luxury European cars. Australian-sourced European cars often offer all the benefits of European styling, but coming from Australia’s dry climate, they usually feature very little corrosion! This is a very rare opportunity to bid on a magnificent collection of iconic names including Ferrari, Lamborghini, Bentley, Porsche and Rolls Royce. 2000 Lamborghini Diablo GTR #4/30 This Lamborghini Diablo GTR is 1 of only 30 ever made from the year 2000 and it was built for speed! The Lamborghini GTR was based off the Diablo GT, one of the most powerful cars produced in the Lamborghini Supertrophy racing series.   In comparison to the Diablo GT, the GTR features improved suspensions, central fixing nut for the rims, race braking systems, additional radiators for transmission oil cooling, very high performance rear wing, simplified interiors and weight reductions.  This car can reach a top speed of 338kph so it was definitely built for racing; the 590-horsepower vehicle even has an integrated roll bar. During the 2001 season, it was part of some of the most prestigious motorsport events, including the Lamborghini Supertrophy Championship which is held every year on the most famous tracks in Europe. 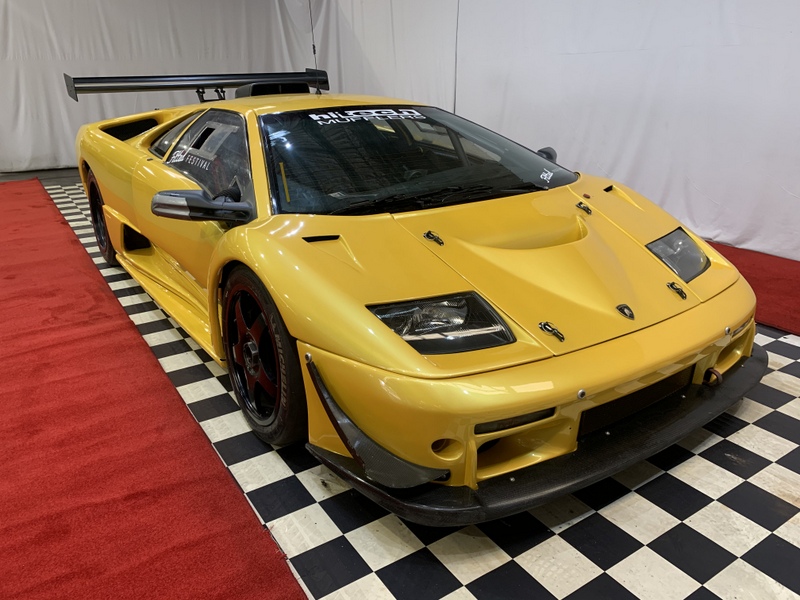 The Engine and Transmission Previous Next The engine management system is based on the proprietary Lamborghini LIE electronic engine control system tuned for racing, fuel injection is sequential multi-point, and the ignition is static with individual coils. The Lamborghini Data Acquisition System (LDAD) and diagnostic functions are integrated in the engine electronic management system. For the engine cooling, two water radiators in the parallel are side mounted to the engine and an engine oil cooler is front mounted as in the Diablo GT. Additional coolers for the gearbox and differential oil were installed in order to better match the racing overloads. The transmission is on the rear wheels through a Lamborghini 5 speed gearbox with one basic gear ratio option and an alternative option for a shorter 5th gear ratio. The gearbox lever is in an asymmetric position on the central tunnel in order to be closer to the steering wheel, for better control and naturally, the steering system is powered assisted. The front suspension has been modified for racing, the shock absorbers and anti-roll bars are adjustable. Don’t forget, a special fuel tank with a fast filling system has also been installed.

The Body and Cockpit

The rims are lightweight magnesium alloy with a central fixing nut and they accept racing type tyres. The braking system is based on the Diablo GT high performance module. New racing brakes calipers have been adopted to better match the very severe racing conditions! Most of the body is carbon fibre made, except for the roof which is made of steel for torsional rigidity. For safety reasons, the doors are made of aluminium. The cockpit fittings are simplified to meet racing requirements. The driver’s seat has been moved towards the longitude axle of the car, reducing the size of the central tunnel which ensures a better driving position. Racing switches for ignition and for other functions have been adopted instead of the series push buttons. Also featured is a highly necessary, six-point safety belt for the driver. It is speculated that only 28 of the Lamborghini Diablo GTRs still exist and only 4 are known to be in the U.S. at present. So, who knows, this might be the only one in Australia right now! We are already receiving such enquires that suggest this rarity will be highly reflected on the auction day! Previous Next

Previous Next This highly desirable and unique Lamborghini is amongst 48 other exotic European classics like the matching numbers 1959 Porsche 356 1600 S. This 1959 Porsche 356A / 1600S convertible D Roadster was delivered new to the USA and its restoration was completed in 2002 in California prior to being shipped to Australia. The convertible D was a somewhat more practical car than the speedster with a larger windshield, wind-up windows, and more comfortable seats while retaining the beautiful body lines and downward sloping belt line that now attracts so many 356 enthusiasts. These special cars were built to be driven and this example is no exception. It really is a beautiful car to drive and a rare opportunity to own an appreciating asset that can be enjoyed on the road. The Bentley Derby Gurney Nutting Sedanca Coupe was originally sold new in London, UK. Although official build numbers do not exist, it is believed that less than 20 Bentley Derby's received coach work from ultra-exclusive coach builders Gurney-Nutting. This vehicle received a full ground up, no expense spared restoration to the original specifications. This included a full rebuild of its original engine, bare metal respray of its original body and new period correct leather interior. Today it presents exceptionally and would be home in any classic vehicle collection anywhere in the world. And last but certainly not least, the 1972 Ferrari 365 GTC 4 Coupe presents the very rare opportunity to secure the perfect addition to your Ferrari collection. This vehicle has previously been fully restored with the highest attention to detail in bringing this amazing Ferrari 365 GTC to its factory correctness. With only about 500 examples ever built in this configuration, the investment potential and tremendous upside of this mint condition example lays testament to the passionate Ferrari enthusiasts who fastidiously kept, loved and adored this vehicle. If you want to keep up to date with all our unbelievable Classic Car auctions then simply pop your email address below and we will send notifications directly to your inbox!