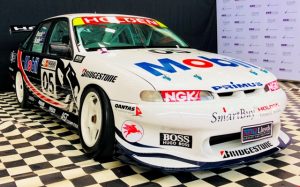 The Later Years of Brock and Mobil

Peter Brock’s return to driving a factory-backed Holden Commodore in 1994 for the Holden Racing Team was celebrated far and wide by Holden fans.

His four-year period with the team saw him have regular race wins and proved he wasn’t done yet. Although when it came to the big names like Sandown or Bathurst, things just didn’t seem to go right for Brock!

But in 1995 Brock won the one-off ‘Peter Brock Classic’ event in Melbourne being able to make the big claim he won the event named in his honour!

Eventually, after 30 years of racing, Brock chose to slow down a bit. The 1997 racing season was a special one in the history books of Australian motorsport given it was the farewell to full-time racing by Peter Brock. It was also the very first year of the V8 Supercar era of racing in Australia!

For the 1995 season Brock’s Mobil HRT Commodore was updated to the new VR model specification. Underneath the car was very similar, but the outside got an aerodynamic design makeover brought on by Holden’s wind tunnel testing!

One of the highlights of Brock’s 1995 season was a stunning ‘rear of the field’ to 2nd place drive at the Mallala round in South Australia.

But during both the 1995 Sandown 500 and Bathurst 1000, exhaust and engine problems sidelined Brocky and co-driver, Tomas Mezera, in both races.

Even just going for pole position at Bathurst, gave Brock trouble that year. He crashed the VR Commodore at The Cutting during his lap, meaning he did not record a time and started in 10th spot.

This is the very car Brock and partner, Dave Boddy, drove in the 1995 revival of the “Round Australia Trial”.  It took the 160 competitors three weeks to complete a 19,000 km race which Mobil sponsored.

He was going quite well in this car until he had an accident and came off the road! He ended up colliding with his teammate, Ross Dunkerton, who stopped to tow him back on the road.

The drama continued, and Brock cleaned up in a crash with a Suzuki, but he didn’t give up! Brock still finished 31st in the trial which was won by Holden teammate, Ed Ordynski.

Here we have a tribute car of the very first Group A car to run at Bathurst for Holden, which was an HDT built car.

As a lot of people would be aware, this car here would have been the car that they knocked the windscreens out of at Bathurst. After getting a cracked windscreen part way through the race, Brock was forced to remove it altogether and wear a visored helmet.

It is rumoured that he was being sprinkled with bits of glass and was holding the glass in place with one hand as he raced down the Conrod Straight! The rear windscreen also had to be removed by a crew member kicking it out from inside the car later in the race.

After all of that, this Commodore was going hard with Peter Brock and David Oxton sharing the driver’s seat and they were sitting in second place with three laps to go. But unfortunately, the timing chain broke, meaning they went from second place to retiring from the race!