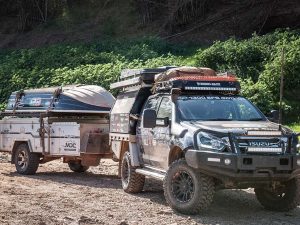 “It is extremely rare that you receive high value items from a popular TV series that have been signed by well-known hosts of the show and have been tested by them; let alone selling them all under the hammer completely unreserved,” Mr. Glenn Screech Head of Business Development for Lloyds Auctions said.

The caravans and campers in this auction were fitted out and put through their paces by Australia’s number 1 four-wheel-drive and adventure show, ‘All 4 Adventure’ with the vehicles featuring throughout their most recent television series on Channel 10.

With the auction consisting of five stellar lots, Glenn Screech has stated that this auction holds some must have items for those serious adventurers out there.

“We are honoured to partner with All 4 Adventure to auction these campers that were used during the TV series by two of Australia’s greatest adventuring legends, Jase and Simon along with their crew,” said Mr Screech.

“There is no denying this exhilarating TV series has been a hit, with the show now in its 10th season with a huge social media following. It could be the most adventurous auction yet with caravans, camper trailers and utility’s up for auction completely unreserved and all starting at $1 this Tuesday,” continued Mr. Screech.

“This auction has some great caravans and campers all completely unreserved and it’s not every day that these opportunities come up,” Mr. Screech continued.

For more information on this auction or to place your bids, head to www.lloydsauctions.com.au