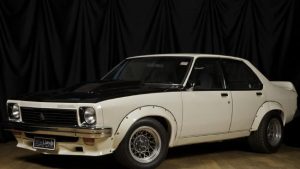 A rare four-door Holden Torana SLR5000 A9X – the very first off the production line in 1977 – has sold for an Australian record price of $365,000 at Lloyds Auctions on the Gold Coast over the weekend.

Bill Freeman, Lead Auctioneer from Lloyd’s Auctions and Valuers, said the price achieved at Saturday’s auction was more than double the previous record.

“The highest price at auction for a four-door A9X Torana was $165,000, so we’ve more than doubled the previous record, which is very exciting for the owner and for Torana investors around Australia,” Mr Freeman said.

“This sale shows the buyer interest in the Torana A9X market is continuing to grow, which is great news for Holden classic car owners everywhere.”

“There was an incredible amount of interest in the car in the lead up to the auction, with our online video going viral, with more than 1.5 million views,” he said.

The Torana has an incredible history as a Holden ‘press car’ and was a treasured collector’s item for the previous owner, who passed away last year.

“This car is the holy grail of Toranas. It was the very first Holden Torana A9X sedan off the production line in 1977 and it’s got the paperwork to prove it,” Mr Freeman said.

“The car then became the General Motors ‘press car’, meaning all the motoring scribes of the day took the car on road tests. It also went on display around New South Wales and Victoria.”

“It’s got excellent paperwork history, along with photos of the original ‘press test’ drive at Calder Park Raceway in Melbourne.”

“It’s been in the same family for many years, and was sold in honour of the owner, who’s mother entrusted Lloyd’s with such a sentimental sale of a prized piece of Holden motoring history,” Mr Freeman said.

See the full video of the auction and the story behind the sale of the car: https://youtu.be/hqG54xBw2YI